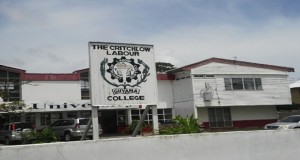 One of the temporary operational bases for the Public Procurement Commission.

The Public Procurement Commission (PPC) is preparing to ask government for more than GYD$120 million dollars to hire highly qualified and experienced staff, some of whom will be required to conduct specialised investigations to unearth multi-million dollar fraud, according to sources in government.

Government allocated GYD$76.2 million as a start-up budget for the body that had been provided for in Guyana’s constitution but had never been operationalised for about 11 years. However, the PPC could only seek a Supplementary Provision (additional funds) after six months would have passed.

Sources said more money would be badly needed to allow the PPC to hire highly qualified and specialized auditors to follow the money trail aimed at unearthing corruption in the award of contracts funded by the public purse and international financiers such as governments and banks.

A number of property owners, sources said, have already been approached to rent

The Commission has already begun searching for appropriate space to house its operations instead of using Committee Rooms at Parliament Building or the Conference Room at the Critchlow Labour College.

In a statement issued on Friday, the PPC bemoaned the impact that several “primary impediments” have been having on its work ever since it was established in October, 2016. “It should be noted that the primary impediments to the full operation of the PPC are the absence of appropriate office accommodation, adequate budgetary resources, transition of functions from the NPTA (National Procurement and Tender Administration (NPTA) and requisite staffing of the Secretariat of the Commission. These issues have affected the accessibility of the PPC to the full range of stakeholders that it is intended to serve and restricted its ability to fully execute its functions in a stable and appropriate environment,” the PPC said.

The Commission said it has already received and reviewed complaints from contractors, but this process has been constrained by several issues referenced later in this document.

After the Commissioners elected a Chairperson- Carol Corbin- and Deputy Chairperson- Dr. Nand Kishore Gopaul- they met with  the Public Accounts Committee on the benefits and conditions of service for the Commissioners, the determination of a staff structure for the establishment of a Secretariat, including the preparation of the terms and conditions of the proposed staff, of which, the three principal officers require the approval of the National Assembly.

The PPC announced that despite constraints, they have finalized the structure for the establishment of the Secretariat of the Commission and have begun crafting strategic and operational plans for the Commission.

In this regard, the process of the recruitment of the Chief Executive Officer/Secretary of the Commission and the two most senior officers is well advanced.  “A report on the selection of the suitable candidates for these posts has been submitted to the National Assembly and the Commission awaits the approval of their terms and conditions by the National Assembly as required by Article 212Z. (2) of the Constitution.

The recruitment of other support staff for the Commission as required by Article 212Z. (1) of the Constitution is in progress and work has commenced on the preparation of a strategic plan and operational plan for the Commission and its Secretariat,”

The PPC said after “a detailed review of the applicable legislative framework,” the Commission engaged several stakeholders within the national procurement system to sensitize them to the role and functions of the PPC.”

The  more than 100 public officials with whom discussions were drawn from several agencies and departments that function in the public procurement system and deal directly with procurement matters.

Some of the agencies engaged thus far include: The Audit Office of Guyana, Public Accounts Committee (PAC), National Procurement and Tender Administration Board (NPTAB), Ministry of Finance, Ministry of Public Infrastructure, Ministry of Education and the Inter-American Development Bank (IDB). Ultimately, in fulfillment of its mandate, the PPC intends to engage all procuring entities across Guyana.

The PPC said it has also received and reviewed complaints from contractors, but this process has been constrained by several issues referenced later in this document.

2017-02-24
Denis Chabrol
Previous: ‘Fine Man’, one other remanded to prison for armed robbery
Next: Kitty man remanded for murder of homeless man near Martini nightclub