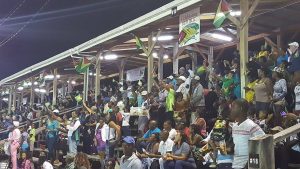 A section of attendees at the 47th Republic Anniversary Flag Raising Ceremony at D’urban Park, Georgetown.

President David Granger Thursday- Guyana’s 47th Republic anniversary- said Guyana has achieved unity, and he highlighted the contributions of East Indians to the country’s development in this year which marks the 100th anniversary of their arrival here as indentured servants.

Addressing the flag raising ceremony at D’urban Park, the Guyanese leader said 2017 is an opportunity for Guyana to celebrate the contributions of the Indian community.

He credited the almost 240,000 Indians, who were transported to then British Guiana from 1838 to work mainly on sugar plantations for almost 80 years, with contributing to the cultural and economic development of this country. Most of them opted to remain here rather than return to their native land.

“Most of the indentured immigrants remained to make our country their home at the end of their contracts of service. They invigorated our cultural life with devotional festivals, colourful dress, tasty foods, vivacious dance, vibrant music, two great world religions – Hinduism and Islam – and other cultural retentions. 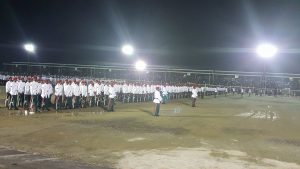 The indentured labourers were brought here after slavery was abolished and  free labour had been no longer available to plantation owners.

The President said Guyana’s 47th anniversary as a republic “is a happy occasion to celebrate the uniqueness of our nationhood” intensified efforts to to unite the descendants of fore-parents who were brought to these shores, either as enslaved workers or indentured labourers, to toil on the plantations.

“Independence reminded us, also, that it was their struggles – their resistance, revolts and riots on the plantations – which helped to make their descendants a free people and to make this country a free state.

The establishment of the Cooperative Republic on 23rd February 1970 intensified our efforts to unite our peoples into a plural nation under the inspirational motto – ‘One people, One nation, One destiny’,” he said.

He said Guyanese – the descendants of the indigenous Amerindians and of those who were brought here from Africa, Asia and Europe – have welded our country, irreversibly, into a plural society.

The Republic started the task of shaping a society that was culturally plural by promoting the unhindered celebration of the Christian, Islamic and the Hindu festivals. The Republic aspired to ensure that we would live together in harmony free from racial and religious conflict,” he added.

President Granger said Guyana is committed to eliminating extreme poverty, eradicating inequalities; expanding the space for cultural diversity and enhancing the sense of national belonging. The Republic is becoming a more socially cohesive country, one that: “… works towards the well-being of all its members, fights exclusion and marginalisation, creates a sense of belonging [and] promotes trust…”

He added that , “Guyana’s various cultural threads have been interwoven into the tapestry of nationhood. We celebrate, today, our republicanism and our pluralism. We have achieved unity by our diversity.”

He greeted Guyanee at home across the country’s ten regions and in the diaspora on this 47th anniversary of the Republic.

The flags of each of the 10 administrative regions were among those that fluttered just north of the stage where dignitaries were seated.

Possibly due to competing events, just about 4,000 persons attended the event.