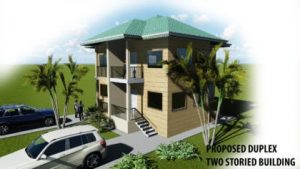 The units will be constructed at a cost of $5 Billion, (or $5.4Million each), Minister of State Joseph Harmon reported at the post-Cabinet briefing at the Ministry of the Presidency held on Friday.

The construction of the housing units is the first phase of a programme to develop local housing, particularly targeting public sector employees, youths and low-income earners, Minister Harmon said. The units would take the form of either town houses or duplexes.

The project is expected to start “almost immediately,” and “it is anticipated that within the space of 12 months it will be completed,” Minister Harmon said.

The housing project will continue to be rolled-out, over the ensuing two years, and will benefit several other communities, the Minister was quoted as saying by the Government Information Agency (GINA).

“The important distinction that we want to make is that we are not just issuing house lots. We are building homes within communities for the citizens of this country,” Minister Harmon stated.

The minister explained that the persons who would benefit from this first batch of housing units will be drawn from the over 25,000 housing applications backlog that is currently in the system. The minister said that thus far, the Central Housing and Planning Authority (CH&PA) has been able to narrow down the possible list of beneficiaries to 1500.

The construction of the units is projected to have a ripple effect across the economy. It is expected to create employment opportunities for thousands and increase the demand for construction material, Minister Harmon said.

Meanwhile, the minister also reported that the 2014 audited statement of CH&PA has been submitted to Cabinet by Minister of Communities, Ronald Bulkan.

Minister Harmon said that Cabinet noted the statements and directed that they be tabled in the National Assembly as required.