As Guyana prepares to join a Norway-headquartered organisation that guards against corruption in the natural resources sector, a member of the business arm of the local chapter has weighed in on United States President, Donald Trump’s decision to allow American companies to withhold information about contributions to foreign governments.

Businessman, Hilbert Shields who is part of the Multi-Stakeholder Group of the 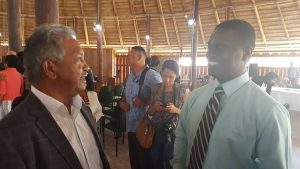 , said Trump’s repeal of the Dodd-Frank Law and related Cardin-Lugar rule means that American companies operating overseas, especially in the extractive sector, no longer need to disclose payments they make to foreign governments.

“There was a global mechanism which they would have had to follow as a requirement of the US government. Now that it has been repealed, your question is a valid question- what mechanisms are there to say to somebody like ExxonMobil- you should make the same level of disclosure in Guyana even though this has been repealed,” Shields told Demerara Waves Online News.

Minister of Natural Resources, Raphael has already denied reports that ExxonMobil had helped finance the governing coalition’s election campaign in 2015.

The launch of the MSG on Wednesday moves Guyana one step closer to joining the global watchdog named the Extractive Industries Transparency Initiative (EITI) before year-end. The United States (US)-headquartered Carter Center has been hired to help Guyana put the MSG on a solid footing.

Before Guyana can be considered eligible to join EITI,  National Secretariat Coordinator Dr. Rudy Jadoopat said there is need to adapt the terms of reference of the MSG, review and finalise the draft workplan, prepare a communications strategy and plan and review and finalise a scoping study.

He said much would depend on the individual Corporate Social Responsibility to abide by a set of rules. “It is up to the company at the end of the day, there is a mandatory set of requirements. Once they have met those set of requirements, then there is nothing much else you can do,” he said.

Shields, who has had investments in Guyana’s gold and bauxite industries, could not say what impact the repeal of such a law would mean for Guyana. Nevertheless, he pointed out that an overwhelming amount of the information that the MSG requires is publicly available. “Ninety-five percent of the information that is required by the MSG is in the public domain. You just have to put mechanisms to ensure that all of that information… Some things are beyond your control,” he said.

Bernard said the body has the leverage to ask companies and government to explain any differences in declarations. “The way the EITI operates- there are two sets of disclosures from the government and the companies but there is also a third process- you can call it an audit or a verification of the numbers and a reconciliation of what is said is remitted by the companies and what the government says it receives and any discrepancies in those two declarations would need to be explained or it would be to corrected if Guyana is to remain part of the global initiative,” Bernard.

He is confident that because the MSG is not controlled by any single interest group but instead includes  civil society, government and the businesses help to “guard against false disclosures or under or over declaration of numbers because the government has to disclose its numbers independent of industry and then those two have to be reconciled by an independent party.”

Civil Society’s representatives on the GEITI’s MSG  were selected through Policy Forum Guyana after public advertisements for persons based on their qualifications and experience in at least three civil society organisations.  A representative of the Indigenous Peoples was selected through the National Toshaos Council. Those representatives are Senior Councillor and environmental activist at Santa Rosa Village, Paul Atkinson; Civil Engineer, Larry Carryl; Chemist and Human Rights Activist Njuma Nelson and Curtis Bernard. The alternates are Founder and Coordinator of the Guyana Environment Initiative, Romain Camacho; Civil Society Activist on Environment and Gender, Vanda Radzik; Human Rights Activist, Mike Mc Cormack; and Governance and Rights Coordinator, Laura George.