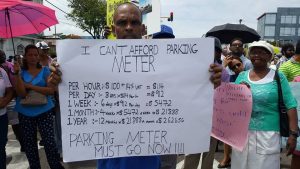 Despite an announcement that the parking meter fees would be slashed by 50 percent, Guyanese turned out in larger numbers on Thursday to vent their disgust at the agreement between the Mayor and City Council (M&CC) and Smart City Solutions (SCS).

Many businesses closed their doors and staff used their lunch-hour to  congregate on Regent Street opposite City Hall to let their concerns about the agreement be known.  This is the largest  gathering so far since the protest began two weeks ago.

City Mayor, Patricia Chase-Green’s announcement to representatives of commercial banks that the rate would be slashed from GYD$50 plus 14 percent Value Added Tax (VAT) to about GYD$25 for 15 minutes or just about GYD$100 per hour was rejected by several persons.  Commercial bank workers are also to be provided with parking permits.

In the case of one picketer, he calculated that paying almost GYD$1,000 per day or almost GYD$22,000 per month to park in the city would still be too expensive and said such a revenue generator could not be imported from Developed Nations to Guyana. “”it got to go. It must not stay. We don’t want any parking meter in the town. We are not ready for that because we cannot afford it. This country is a Third World country,” said Patrick Solomon who lives at West Bank Demerara. 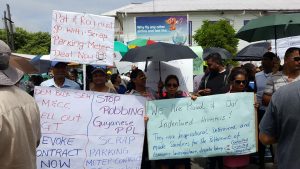 From the picket line, a woman disagreed with Mayor Patricia Chase-Green that SCS in reality is not  taking 80 percent of the earnings out of Guyana because that company still has to pay salaries, taxes, social security and other operational costs.

Major concerns are that a foreign company would be taking away 80 percent of the earnings, leaving behind a meager 20 percent for the cash-strapped municipality. “If you need the money, you put up a couple of meters in the middle of the town where it’s congested and we Guyanese will pay the money to you but don’t come and tell me ‘bring a foreigner from somewhere and he is going to pay 80 percent of the money’; that’s not fair. Why am I paying rates and taxes and I can’t park in front of my house anymore, I can’t go the church anymore, I can’t go to the mosque anymore. That’s nonsense just for somebody else to get rich,” Carlene Gill-Kerr told Demerara Waves Online News. 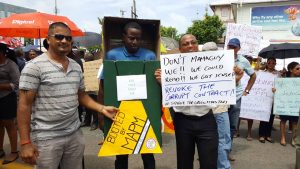 She recommended that the contract be revoked and a promise made to pay off the company when Guyana begins producing oil in 2020/2021. “It’s slavery. Tell them you are going to pay them and when the oil money comes you can pay them off completely,” she said.

Legal experts are having mixed views about whether the agreement between the two parties could be revoked without leaving City Hall with huge liabilities to SCS which has invested at least US$10 million in the project.

With the Movement Against Parking Meters (MAPM) stating that the M&CC- SCS deal is a monopoly, Attorney-at-Law, Nadia Sagar acknowledged that there is room for the matter to be taken to the Competition Commission. “It can be challenged as unconstitutional, it can be challenged potentially as anti-competitive and it can go to the Fair Trading Commission. There is nothing stopping that. Whether that is something that we will be doing, it’s open to anyone who has an interest in challenging it through those routes,” she said.

The fallout from the parking meter controversy has already seen SCS firing one of its directors, Kamau Cush, after he made unsavoury remarks about critics of paid parking in the City.

Raquel Caesar-Thomas, one of the MAPM organisers, hopes that Saturday afternoon’s town hall meeting at St. Stanislaus College will provide an opportunity for the Mayor  to “come and let us hear her side of the story” and educate and inform Guyanese.

Thomas-Caesar said the M&CC-SCS contract amounted to sell-out of the City for the provision of parking areas, parking systems without any public tendering. “For me, Guyana has been sold and we need to take it back,” she said and urged City Hall “to listen to the people because if we go through with this Guyana loses, the people loses,” she said.

The New Building Society (NBS) has already challenged the legality of Minister of Communities, Ronald Bulkan approving the parking meter bylaws without first allowing a statutory period for objections.