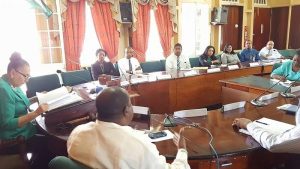 Parking meter rates are to set to be slashed by half and motorists will be able to use remaining time at any other space, top City officials announced on Monday.

Addressing representatives of commercial banks at a meeting held at City Hall’s Chamber, Town Clerk Royston King and City Mayor Patricia Chase-Green said the rates would be reduced to GYD$28 VAT inclusive for 15 minutes or about GYD$100 per hour.

They said left over time from one space could now be used in other parking areas in Georgetown.

Meeting with the Mayor and Town Clerk were representatives of Republic Bank, Demerara Bank and Guyana Bank for Trade and Industry. Mayor Chase-Green said employees of commercial banks would be allowed to use their parking lots and in other instances be provided with monthly parking permits at reduced rates. Managements of commercial banks are required to submit lists of vehicles that would be using parking lots, they said.

The booting fees and how long after expiration time should vehicle wheels be clamped, King said, are being examined by City Hall and Smart City Solutions.

King hailed the parking meter system as contributing to less congestion, lower greenhouse gas emissions, quicker transaction of businesses and no breaking and entering of vehicles. “Since we rolled out this project over the last three weeks, we have had no reported case of ‘trunkers’ or of criminal activities related to breaking and entering of vehicles and the carrying away of individuals’ properties,” the Town Clerk said.

Following outcry by a wide cross-section of citizens that led to a meeting between City Hall and President David Granger last week, the Town Clerk acknowledged that the current rates are too high. “We would be making adjustments with respect to the pricing for particularly those people who are parking very long hours- eight hours plus- particularly public servants and the ordinary worker. We recognise that that is exactly burdensome in terms of the two hundred dollars…,” he said.

Meanwhile, Opposition Leader Bharrat Jagdeo on Monday reiterated his People’s Progressive Party’s (PPP) support to the ad hoc group of civil society activists, Movement Against Parking Meters (MAPM), and rejected plans by City Hall to reduce the parking meter fees. “There are so many other features of that contract that are unbelievably stacked in favour of the investor that a mere reduction of the price of the parking meter will not remove this yoke that has been placed on the backs of the citizens of Georgetown so that is why we are saying a mere reduction- a palliative- is not adequate,” Jagdeo told a news conference.

The Town Clerk said City Hall is so cash-strapped that it has had to grant amnesties to allow defaulting rate payers to settle their debts, but at the same time they have forgone GYD$890 million in 2015 and GYD$2.3 billion in 2016.

The City says it needs monies to rehabilitate and build new roads, improve environment and sanitation and provide maternal and child health services.

MAPM, meanwhile, on Monday vowed that it would not give up its struggle for the contract between the M&CC and SCS to be revoked. A Town Hall meeting has been planned for next Saturday, February 18, 2017.