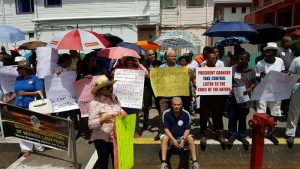 As the Mayor and City Council continues its consultations with stakeholders on the controversial parking meter system, the largest organised vocal group- Movement Against Parking Meters (MAPM) – on Monday insisted that the existing contract must be scrapped.

Group spokesman, Christopher Chapwanya told Demerara Waves Online News that although he and other group members want the deal abandoned, they believe that it is important for City Mayor, Patricia Chase-Green; Town Clerk, Royston King and others participate in a town hall consultation. He said the town hall meeting would provide an opportunity for the Mayor and other officials to tell the wider group of concerned citizens “the manner the contract was arrived at” instead of a handful of MAPM representatives.

Chapwanya said it is not that MAPM is opposed to parking meters, but is very concerned that the contract between City Hall and Smart City Solutions (SCS) would put the Georgetown at a disadvantage. “We are not against parking meters so why not let’s have a discussion on a way forward if it’s a case that the City, the Mayor and Town Clerk, the officials there are genuinely interested in having a parking meter project that works for everyone then why not have a discussion going forward about this and why not let’s start that discussion now,” he said.

MAPM says it has not been invited and will not be attending any consultation with the Mayor and City Council (M&CC) planned for Monday.  Instead the group would be inviting Chase-Green; Minister of Communities, Ronald Bulkan and Minister of Public Infrastructure, David Patterson to a MAPM-organised Town Hall meeting scheduled for Saturday, February 18, 2017.

If the parking meter contract between the M&CC and Smart City Solutions is not  withdrawn, MAPM says it will present a petition to President David Granger when they get at least 5,000 signatures.

City Hall maintains that the 80 -20 deal in favor of SCS is good for the city’s strained coffers that has for decades been struggling to provide basic services such as garbage collection, proper roads and bridges and adequate drainage.

“The contract has to be scrapped. It must be revoked. Lowering the fees and making some minor adjustments in terms of booting fees and so on would not change what is really a terrible, terrible contract,” said Chapwanya. 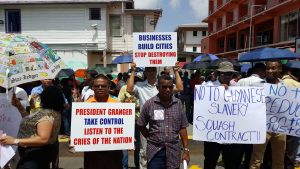 Speaking from the latest mass picketing demonstration outside City Hall, concerned workers and residents said the current parking meter system would not work and is more than just a mere reduction in the rate that currently stands at GYD$50+ VAT for 15 minutes . “I am concerned about the business people too. They should have some provision for parking. And residents that are living in the area; they should have some sort of provision too. You can’t be living in a particular area and you are paying for parking,” said Cecil Hinds, who lives elsewhere but works in the City.

With the amended contract providing for a rate hike every two years in line with Guyana’s inflation rate, the mood is for the contract to be revoked. “I would like it to be scrapped. It can’t work. It is too much of a burden on the people,” said.

Well-known Robb Street businessman, Suresh Narine labeled the parking meter system a “wrong plan” for a Developing Nation. “This is a First World country’s programme that they are putting into a Third World economy. It is impossible for it to work. There are other ways for generating funds and they only have to listen to the people,” he said.

Though the planned reduction in the rates was welcomed by a few persons on the picket line, they insisted that they are more concerned about the origin and process of the parking meter contract. “It is a good move but it is definitely not enough to alleviate our concerns because there is so much wrong with this deal….We just need to take this deal right back to the table and start again. 80-20 is ridiculous, totally. I will stand here until this is rescinded,” said businesswoman, Alana King. 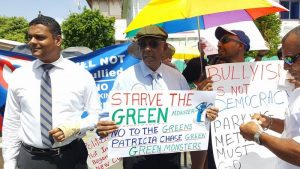 Another city resident added that the “core issue” is the way the contract was negotiated and not only an increase in fees. “The terms of the contract does not make financial sense to the Council. If they are talking about reducing the fees, it makes even less sense for them because 20 percent of lower going forward does not make sense and so the only way is to scrap this whole thing and start over,”  Shameza David.  Her friend said the contract was clearly negotiated in someone else’s interest. “Draconian is an understatement. The fees are really a distraction. That is really the least of the issue,” said Stacy Fraser.

Their sentiments were shared by a number of employees of the Bank of Guyana who participated in the last protest. “The manner in which it was done- the whole process- I am saying from the beginning it was not a transparent deal. Concerns would have been raised and those weren’t addressed,” Mohan Somwaru said.

His colleague suggested that City Hall should have run the parking meter system on its own after conducting a feasibility study and consultations, instead of agreeing to give an 80 percent stake to SCS. “Maybe, they (M&CC) could have bought the parking meters and run it on their own and take all the proceeds rather than having a foreign company coming to Guyana to exploit us. I don’t agree with that,” said Clement Stanford.

Another Bank of Guyana official said the impact of exorbitant paid parking on staff members of his entity, other banks and businesses in the business district was not considered.

A United States-based Guyanese woman said paid parking in the City was piling on more taxes on the citizens who are already faced with higher taxes and huge cost of living. “Living pay cheque-too-pay cheque is not really enjoying a quality of life so I won’t be satisfied with any level of reduction; just take it out,” she said.  Daily paid parking in the city could cost workers more than GYD$80,000 per month, apart from monthly installments for the purchase of their vehicles. 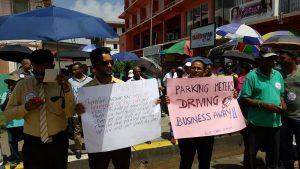 MAPM plans to hold another midday protest this Thursday at 12 noon outside City Hall.