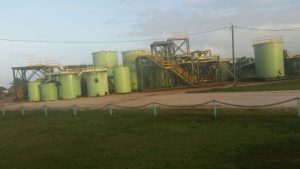 Guyana Goldfields/ Aurora Gold Mines (AGM) is preparing to expand operations in the western part of the country where it has found more gold deposits, officials said Sunday.

Chief Executive Officer, Scott Caldwell said in preparation for the extending the life of the Aurora mine, the company has purchased a mill extension at a cost of US$70 million. The CEO said the company forecasts that that the Aurora mine would increase annual production from 150,000  to at most 210,000 ounces of gold.

The company says it plans to produce 170,000 ounces. “So far, one month down things are looking pretty good so eleven months to go and we are striving to make around 170,000 ounces of gold so a slight increase in production over last year,” Caldwell said.

In addition to that, he said the company has purchased another mill at a cost of US$6 million to begin production at other areas where exploration is showing good signs. Caldwell said the modular mill could be set up “very, very quickly” about 50 kilometres after successful exploration and approvals. “We won’t be working on those projects probably until next year but we like the indications that we have so we purchased that new mill,”

“We are so confident in our success on exploration, we bought another mill. We have imported most of the mill, we have got some more parts to bring into the country,” he said.

Assuming that the price of fuel and the cost of labour remain at today’s, the President and CEO of Guyana Goldfields said his mining operations could continue at US$800 per ounce. “We would be one of the last mines to shut down,” he said.

The company boasts an excellent occupational safety and health record with no accidents or injuries during the past 468 days. “There is no company in Guyana and I say it proudly and boldly that can demonstrate or exhibit such a safety record and it goes to show the efficiency in the way we conduct our business,” said Aurora Gold Mines’ Health and Safety Coordinator, Michael Williams.

Williams said the company’s record of no loss time injury in its 15 months of operation “is a feat that is second to none in Guyana.”