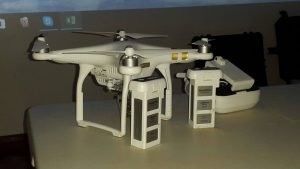 The Canadian-owned Guyana Goldfields / Aurora Gold Mines (AGM) is offering to train Guyana’s security personnel in the use of drones, but so far government has not responded, a senior company official said Sunday.

AGM uses the unmanned aircraft to survey its mine properties, monitor the environment and conduct security surveillance of the area in western Guyana.

The company’s Country Manager, Violet Smith said AGM is willing to provide free training by its drone specialists to the relevant security agencies.

“We have heard that there is a mood, a trend to look at drones, introduce drones in that (security) sector. We are not part of that but we have written…so we have said ‘we have someone who is an expert in this would be in country for a month. Are you interested in teaching some persons?’ – so that offer is out there,” she said.

Asked whether government has responded, Smith said “so far we have no response.”

The AGM Country Manager said the offer had been made while the consultants had been in Guyana to teach Guyanese security personnel. “There is no fee attached. That’s the point I am making that we do reach out to other groups if we are bringing new technology because we are at the cutting edge of technology in our sector and we are pushing the button on that,” Smith said.

AGM officials said the price of  such drones have in recent months decreased from US$4,000 to US$1,300 and the “optics is better.”

Back in October, 2016, Public Security Minister Khemraj Ramjattan had said that the United States would have been willing to provide drones to help monitor Guyana’s borders.  Guyana has repeatedly raised concerns about the large inflow of guns from neighbouring Brazil.