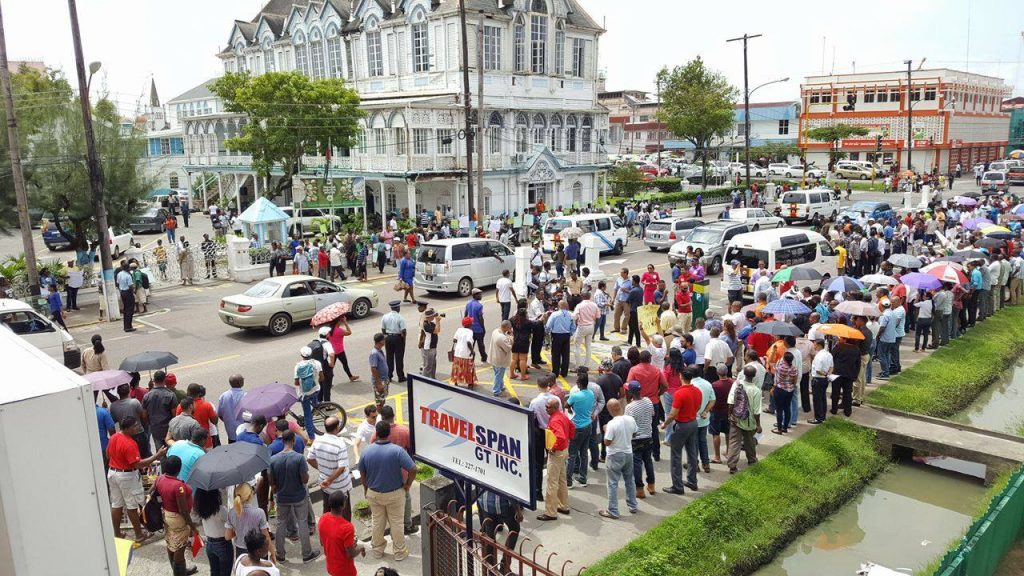 Hundreds of Guyanese Friday morning protested against metered parking in Guyana’s capital, Georgetown, even as a much smaller pro-government group struggled to show any signs of real resistance.

“This is not about politics. Go and record that thrash over there; that nonsense over there. How can he get on a bullhorn and say that about these people. This is business people asking for fairness and transparency, nothing else,” said a businessman from the picket line as he pointed passionately at the pro-meter protesters across Regent Street who were being lead in their chant by APNU+AFC City Councillor, Heston Bostwick. “The PPP uneasy, we want the city clean” Bostwick aid.

The  businessman called for facts and evidence that feasibility study has been conducted. He said the group decided to vent their frustration and anger because they have now formed themselves into a forum to challenge the problem. 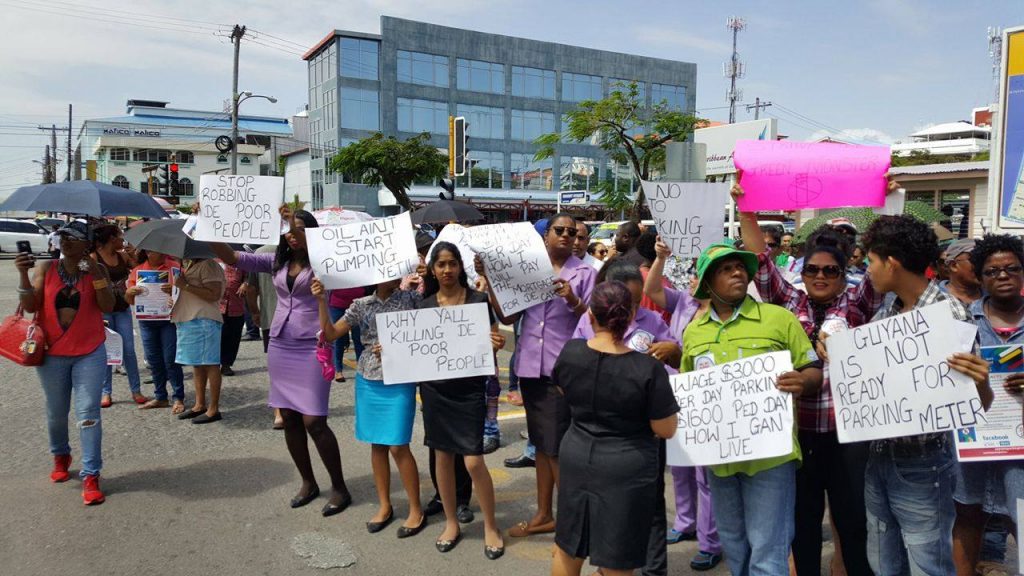 The silent protesters carried placards that conveyed their messages adequately- in total that they were opposed to the parking meter deal between the Georgetown City Council and Smart City Solutions (SCS). Several slogans read “80% for 20 years to a foreign company= Bad Deal #notoparkingmeters”, “ Can’t afford parking meters,” “M&CC+SC= GT: Ghost Town,” “No to parking meters, No prior consultation, no feasibility study, no zoning study,” “Parking meter scan is extortion,” “Public tenders are part of modernization,” and “Impact studies are part of modernization.”

Another protester, Peter Bryan, suggested that if SMS asks motorists to pay GYD$100 per day instead of GYD$50 per 15 minutes would be more acceptable and profitable for the parking meter company. “You got to look after the ordinary people,” he said.

City Mayor, Patricia Chase-Green deemed the action by the more than 300 anti-meter protesters political, while an APNU+AFC councillor chanted anti-PPP slogans in the background. “It is the dishonesty of some of the representatives of Council that are coming out there to give the wrong information that the contract is 49 years when he was a part of it that reduced it to 20 years and so you have people out there arguing for what is there,” she said when asked by Demerara Waves Online News.

Across on the southern pavement of Regent Street outside City Hall, parking meter advocates were being cheered on 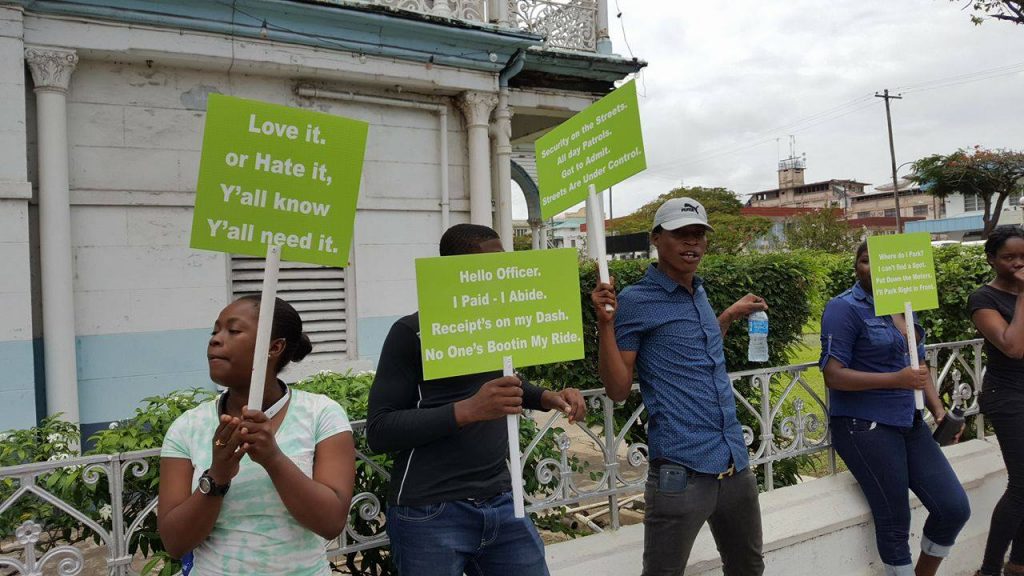 Incoming Deputy Mayor, Lionel Jaikarran disagreed that the anti-meter protest was the work of the political opposition. “On the contrary, I don’t consider it politics at all. This is about the welfare of all Guyanese. This is not one political party here. The people are hurting financially already,” he said.

Meanwhile, Mayor Chase-Green and the business community on Friday appeared to be on a collision course over the impact of metered parking on businesses in the city.  She dismissed reported claims by a number of Georgetown businesses that sales have slumped since paid parking was introduced late last month. “They have not complained to us. The business people have approached us for some of the packages that we are offering to them so I can say I have the majority of the business people on my side,” she said. 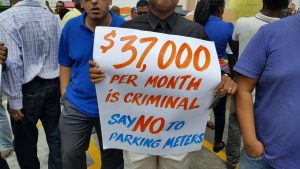 The PSC has urged government to intervene in the current impasse between the citizens of Georgetown and the Mayor and City Council and scrap the “illegal” parking meter contract, saying the meters have virtually crippled retail business in the city.

“The Private Sector Commission has received impassioned pleas of businesses which have seen their sales decline by as much as fifty percent since the introduction of metered parking in the city,” the PSC said Friday.

The PSC accused City Hall of displaying “unmatched arrogance” in their refusal to engage businesses in any attempt to compromise and mitigate the ill effects of this scheme.  The business organisation warned of the negative effects  on the wholesale-retail sector that would spin-off from metered parking. “In an integrated economy such as that of Guyana, the success or failure of one sector has spinoff effects upon the country as a whole. Our Government is aware that the failure of the retail sector