Superbet calls for collaboration to go after armed bandits 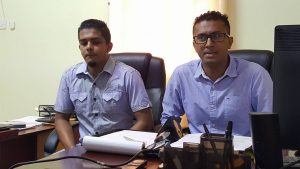 The Suriname-based Suribet on Wednesday called on Guyanese authorities to craft a better strategy to combat heavily armed criminals, in the wake of two robberies in recent weeks that resulted in a loss of millions of dollars and mental scars to workers.

General Manager of Suribet, Ashwien Surjbalsingh told reporters that his business has been robbed twice with AK-47 assault rifles of undisclosed sums of money that have left workers traumatised.

“Our main concerns are our staff who are afraid to do their job now due to the several robberies. It has a spin-off effect. It has a psychological effect. They are traumatised,” he said.

Surjbalsingh cautioned that repeated robberies would scare away investors and tarnish Guyana’s image in the eyes of tourists. “If they see this kind of news, they may change their mind and not come to Guyana which has other  spin-off effects,” he said.

He appealed for assistance and collaboration with several stakeholders, including government and the Private Sector Commission, to help suppress and prevent those types of robberies. “Check the types of attacks and check also what are the possible solutions and how can we start,” he said.

The Suribet General Manager said although guards are armed with handguns, they could not confront bandits with assault rifles.

The latest robbery occurred on Monday when a four-member collection team was attacked and robbed of a bag containing cash that had been received from its outlets. Surjbalisingh ruled out the robberies being the work of employees.