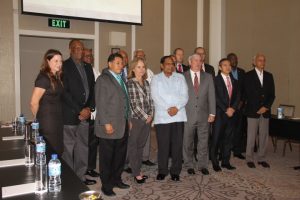 Minister of Natural Resources, Raphael Trotman said Guyanese at all levels including those living in the United States, Canada and the Caribbean would be briefed.

“It is important, as Guyanese and particularly as policy makers, that we know what the resources are, how it is going to be exploited and captured and developed and very importantly how are we going to use the resource for the benefit of all Guyanese,” he said.

The briefing was focused on the Liza find of close to 2 billion barrels of oil offshore Guyana. He said the expert “comes bearing good news about the actual development of the Liza resource, that is how do we intend to take it to production.”

Trotman said commercial oil production is expected to begin by 2020.

The ExxonMobil representative was also expected to update attendees about new technologies and techniques that would be deployed in his technical presentation.

Opposition parliamentarians and Opposition Leader, Bharrat Jagdeo were due to be held separately.

ExxonMobil is expected to quantify its most recent find at Payara in another two weeks before taking the drill ship to Snook, another location offshore Guyana, to search for more oil.

While less than 100 persons will be aboard the Floating, Production, Storage and Offshore (FPSO) ship at any given time during production, Guyanese have been encouraged by the United States to invest some of its oil revenues in  renewable energy, infrastructure and social development projects to generate jobs and make the country sustainable.

Specifically in the oil sector, government hopes to create at least 600 jobs when a US$500 million onshore supply and support base at Crab Island, Berbice River is constructed.  Government has also commissioned a study to determine whether an oil refinery should be built in Guyana.