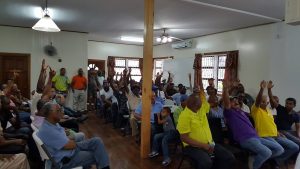 The majority of miners at a meeting of their Gold and Diamond Miners Association raised their hands in support of a call for protest action.

Miners under the umbrella of the Guyana Gold and Diamond Miners Association (GGDMA) on Friday warned they would halt gold mining, reduce declarations and stage a countrywide protest if President David Granger fails to meet with them within two weeks and address their concerns about heavy taxation.

“The main problem we have to accept is that the government does not respect this industry at the present time,” said GGDMA Consultant Tony Shields, reflecting on the fact that miners’ representatives met Granger only once in December 2015. He charged that meeting with government ministers has turned out to be a waste of time and photo-opportunities and the time has come for the Guyanese leader to have a big meeting with the miners rather than just the executive.

Nearly all of the more than 100 attendees raised their hands in support of a protest.

Shields said the GGDMA wants a moratorium on the current tax regime to bring relief to miners. He cautioned against legal action because miners would still have to pay their taxes pending the outcome of a court case.

The warning comes at a time when gold continues to be Guyana’s major foreign exchange earner and there has been a shortage of United States dollars, resulting in a depreciation of the Guyana dollar against major international currencies. “Mr. President, mining is in a crisis. You will need to address this industry, the number one economic thing,” he said, expressing concern that the President said he would only meet as his busy schedule allows.

In the coming days, the miners agreed to document their concerns in a letter to the President, mindful that a previously arranged meeting with him had been cancelled. They intend to pool cash to finance a campaign that could eventually escalate into a protest and cutback in production. “From my observation, I know this country has been a Republic of Guyana but from my observation we are dealing with Col. (Muammar) Ghaddafi or (late Uganda President) Idi Amin,” a pork-knocker said from the floor in expressing concern. “The President is too busy to see us and we are the main resources in this country. (Finance Minister Winston) Mr. Jordan is carrying us all around in circles. We are the ones that put them there and we got to stand firm,” said the elderly miner.

Since meeting Granger two years ago, Shields said the government that the miners supported have taken away their Value Added Tax (VAT) concessions, and increased the tributors tax from 10 percent to 20 percent.  Another miner said it should be the responsibility of the Guyana Revenue Authority (GRA) to collect the tributors tax from miners instead of the owners/managers of mining concessions because some miners threaten to harm them or leave the job.

The GGDMA said it has already spent more than GYD$3 million on hiring consultants to make a case to government. GGDMA President, Andron Alphonso said the association would be pushing for an increase in the income tax threshold from GYD$60,000 to GYD$80,000.

GRA Commissioner General, Godfrey Statia recently told a miners at a meeting that he would explore a  threshold for tributors tax with Finance Minister, Winston Jordan. Statia said he understood that the mining industry was cash-based but cautioned against it being exploited.

2017-01-28
Denis Chabrol
Previous: Bagotstown man shot dead while attempting to rob businessman
Next: AFC must not be antagonistic to APNU -Ramjattan