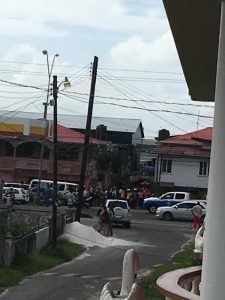 A Bagotstown man, who opened fire on a businessman during an attempted robbery on the East Bank Demerara public road, was shot dead but his accomplice escaped.

Thirty-eight year old Gary Kostov was shot to his left side temple and behind his neck. He was rushed to the Diamond Hospital where he was pronounced dead, police said.

Investigators were told that at about 2:45 PM Kostov assaulted and intended to rob 48-year old Darmindra Dean of Anna Catherina, West Coast Demerara who is the owner of D&D Supermarket and Bar at Annai, Region 9.

Dean, a licensed holder of a .32 Taurus revolver, was a passenger of motor truck GTT 5907, which was driven by Safraz Ali, who stopped at the junction of Houston, East Bank Demerara, to allow vehicles to come out of Rome Access Road, when two identifiable males drove up on a black and grey motor cycle and the pillion rider dismounted the cycle drew a handgun and dealt Darmindra Dean a lash to his face and discharged a round in his direction.

“Dean then pulled out his licensed firearm and discharged several rounds in the suspects direction hitting one of them fell on the roadway, while the other suspect ran south along Mc Doom Public Road, East Bank Demerara and escaped,” he said.

Police said three .32 and one 9mm spent shells were found. The motor truck was examined and a bullet hole was seen on the left side windscreen.