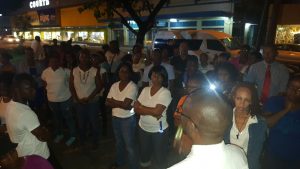 GTU President Mark Lyte (in foreground) addressing teachers during a candlelight vigil on Main Street outside the Ministry of Education.

The Guyana Teachers Union (GTU) claims its candle-light vigil outside the official residences of the Prime Minister and President is already bearing fruit as the Teaching Service Commission (TSC) has called a meeting for Thursday and the union will be  pushing for two sets of promotions this year.

The meeting comes two months after the High Court ruled that the procedure used by the TSC to promote teachers was flawed and must be corrected.

GTU President, Mark Lyte told a group of about 60 teachers outside the Ministry of Education’s Main Street office that the TSC has requested a meeting at 10 AM “for the activity to commence and that is one of the things that we wanted to see happen.”

“We have to hold them to a time. They have not indicated how long this activity will take but we will be pressing to ensure that is concluded by the end of this month latest, half of next month; not longer than that because we would want our teachers who are duly promoted to take their positions beginning of this term and we will be pressing further for another set of promotions are done for September,” he said to applause.

The union Tuesday and Wednesday night held candlelight vigils outside the residences of Prime Minister Moses Nagamootoo and President David Granger to air their grievances on a number of issues including parking meters outside schools and poor salaries. During Tuesday night’s vigil, Nagamootoo summoned the GTU President, General Secretary Coretta Mc Donald and Deputy Mayor Sherod Duncan to a meeting at his residence.

Nagamootoo later told Demerara Waves Online News that he asked the union officials to list their concerns and he would take them to Cabinet. He, however, cautioned that government did not have sufficient cash to pay teachers more. “I asked teachers for submissions so I could make representation to the relevant ministers. I explained that government is in a tight financial situation and couldn’t guarantee additional wage costs but I would represent for non-wage issues,” he said.

Lyte said if the GTU would be reviewing the 2015 promotion list in keeping with the High Court order, it means that appointments would have to be retroactive to that year. “The judge seh suh, yeh the judge seh suh. Money-money-money,” a teacher blurted out.

The GTU President assured that executives would ensure the best deal for retired teachers and those about to retire, in the context of the prolonged delay in promotions.

More than one year ago the GTU had moved to the court to challenge the legality of deciding who should be promoted based on comments by their colleagues instead of set guidelines.

The union expects that existing applications would be reviewed again because many persons who had been promoted by the TSC were not eligible.

The Prime Minister said he mixed with the vigil “because I believe dissent is positive and I commended teachers for their peaceful activities.”