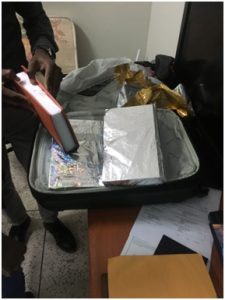 Anti-narcotics police at the Cheddi Jagan International Airport, Timehri at 5:30 Tuesday morning arrested a female outgoing passenger who was on a flight to Toronto, Canada.

She was arrested after four parcels of what is suspected to be cocaine was found in her suitcase. “The substance was weighed and amounted to 4.178 kilograms, she is currently in custody assisting with the investigation,” police said.
Meanwhile, the Guyana Police Force said cops in Berbice also conducted several raids in the Fort Ordinance Housing Scheme, East Canje, where a quantity of suspected cannabis was discovered concealed in a red washing tub.
The drugs were weighed and amounted to 7,748 grams, two suspects are in custody assisting with the investigation.