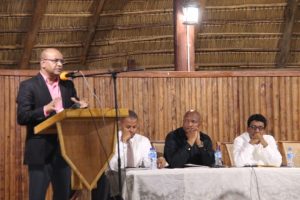 Opposition Leader, Bharrat Jagdeo Friday said he would possibly hold another round of consultations to arrive at a new list of six nominees for the chairmanship of the Guyana Elections Commission (GECOM), but much depends on the outcome of a planned meeting with Attorney General, Basil Williams.

“After that meeting should I have to submit a new list, I would probably consult broadly again with people so that I can get the best names to go forward,” Jagdeo told reporters at the end of a public forum by his People’s Progressive Party (PPP) on the controversy.

The PPP has not ruled out taking the matter to court if the President goes ahead and names a GECOM Chairman if the matter is unresolved.

Consultations by the Opposition Leader with stakeholders for the post of GECOM Chairman are not constitutionally required.

Former Attorney  General, Anil Nandlall is Monday expected to formally request a meeting with Williams to hammer out disagreements over  President David Granger’s interpretation of Guyana’s constitution that a judge, retired judge or someone eligible to be judge should be appointed GECOM’s Chairman.

However, Jagdeo maintains that his six nominees offers the President an opportunity to pick a “fit and proper person” that is also provided for in the constitution.

The Opposition Leader said he Friday afternoon wrote the President informing him that he has given into his request that an emissary meets with the Attorney General to clarify any misinterpretation or misunderstanding about the constitutional provision.

Reacting to concerns by the African Cultural and Development Association (ACDA) that Afro-Guyanese organisations had not been consulted by Jagdeo before arriving at the first list of six nominees, the Opposition Leader said that organisation would be invited to participate in the consultations. “Now that they have expressed a  desire to be consulted, yes they possibly will be should I need to,” he said  when asked by Demerara Waves Online News. 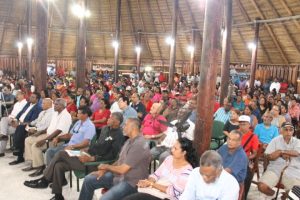 A section of the attendees at the PPP’s Public Forum on the appointment of a GECOM Chairman held at the Umana Yana.

ACDA had called on Granger to reject the list because the consultations had not been conducted with entities representing Guyana’s diversity, but Jagdeo on Friday said he had consulted representatives of the three major religions that make up almost one hundred percent of the country’s population. “I thought that they represent people of every race and religion. If we consult with the representative of the three main religions of Guyana, that’s ninety five percent of our society because they represent people of different faiths and different races,” he said.

The Opposition Leader said ACDA is welcomed at his office at “anytime on any issue” whether or not they are politically supportive of A Partnership for National Unity (APNU).

Earlier, in his remarks to a packed to capacity Umana Yana at High Street, Kingston, Jagdeo warned that President Granger  might be setting the stage to appoint a pro- People’s National Congress Reform (PNCR) Chairman “to convert GECOM into a tool of the PNC with the aim of rigging elections in the future.”

Another possibility, he said, might be that the President is receiving bad advice from the Attorney General.

The GECOM Chairman has a casting vote on matters if there is no clear majority by the six commissioners, who are equally split between the PPP and APNU, especially on controversial matters.

Jagdeo said his position that non-legal persons could be appointed GECOM Chairman because of intent and practice.

Meanwhile, well-known chartered accountant, Nigel Hinds  said the judges, retired judges or persons eligible to judges carry “equal weight” among themselves and also with “any other fit and proper person.” “The meaning of or in Article 161 (2) is strictly an alternative to preceding and subsequent options. The alternative “any other fit and proper person” where other herein refers to a person or thing that is different or distinct from one already mentioned, and is unambiguous evidence that this alternative is neither dependent nor does it carry any less rank than the preceding alternatives,” he told the PPP forum.

On the issue of acceptability of the Opposition Leader’s list of nominees, Hinds said it is only the President could determine whether one, more than one, several or all of the names could render the entire list unacceptable based on the wording of the Constitution.

The Chartered Accountant,  who has been hired by the current administration to conduct forensic audits, called for a “timely and just solution” regarding the appointment of a GECOM Chairman, saying this “depends on how the President discharges the powers vested in him” under Guyana’s Constitution. “It is my profound hope that at this meeting place (Umana Yana) of our people, we embolden the President to act judiciously and expeditiously,” said Hinds.