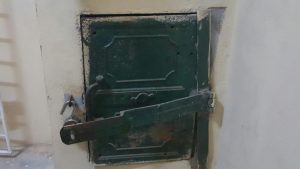 The safe at the Repos- La Reconnaisance NDC office located at the Lusignan Community Centre ground.

Armed bandits early Thursday morning tied up three security guards and broke into an East Coast Demerara Neighbouhood Democratic Council (NDC) office in search of GYD$16 million, but ended up leaving with a few items far less than the value of the money they went for.

Police said the security guards reported that the bandits forced their way into the compound of the Mon Repos- La Reconnaisance NDC office located at the Lusignan Community Centre ground and, tied them up at gunpoint.

The guards told investigators that they were robbed of their cellular phones and cash. They  further alleged that the three bandits broke open the office doors with crowbars and removed several louvers.

Up to about 10 AM, police said NDC officials reported that no cash was stolen, but several items including a weeding machine were carted off.

Other sources said the bandits repeatedly demanded GYD$16 million that they claimed had been in the office. A safe was broken into, but only a few coins were seen inside.