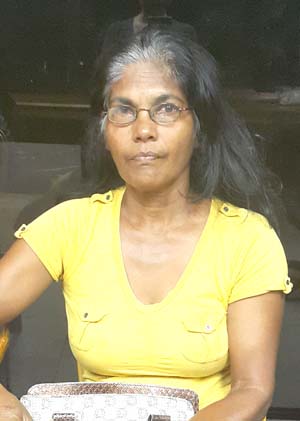 Sarjou, whose remains were found in a shallow grave behind the home she shared briefly with her husband Anand Narine, disappeared in Novemeber 2010 at 28 years old.

In May last year, Babita’s husband, Narine, took police to the shallow grave at his Seaforth Street residence where his wife was buried.

Since yesterday, Narine said all he was hearing about was the Bartica Massacre happening next door in the High Court.

After Singh, Babita’s mother, Champa, took the witness stand. Champa was asked to recall her last time seeing her daughter. Champa works as a farmer on the East Bank of Demerara.

While Champa gave her testimony, Narine took copious notes from the prisoners’ dock. Narine glimpsed briefly at the woman he called his mother-in-law.

Champa was requested by police prosecutor, Neville Jeffers, to positively identify her former son-in-law, Narine, in the court but her eyes barely locked on to him.

Narine, wearing an off-white shirt, brown pants, and a blue rubber slipper on his feet, raised his head from note-taking to briefly gaze in the direction of Champa’s extended index finger, quickly retiring to his notes.

Champa was later cross-examined by Ponton’s lawyer, Hughes, asking she examine evidence collected from the murder scene to discern her familiarity with the articles believed to be her daughter’s.

Even during Hughes’s cross-examination, Narine continued to scribble his notes. Babita Sarjou’s sister, Sunita, was expected to take the witness stand today, however she will give testimony tomorrow when the matter is called again.