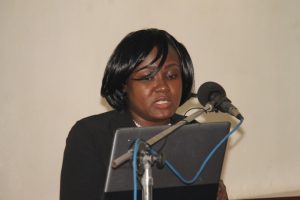 The Guyana government on Wednesday announced that there would an intensified crackdown on Trafficking In Persons (TIP) during the next two years.

“We will increase the number of arrests, charges and convictions of alleged TIP perpetrators by three hundred percent,” Coordinator of the Counter-Trafficking Unit, Tanisha Williams-Corbin told the launch of the 2017—2018 National Plan of Action for the Prevention and Response to Trafficking In Persons.

The Plan of Action envisages that GYD$22.4 million would be spent on prevention, protection and prosecution in 2017 and 2018 in partnership between government and civil society.

Two persons were convicted for human trafficking locally in 2015.

President David Granger said government’s efforts include the provision of a shelter, and psych-social services to victims. From this year, he said wardens would be deployed to go after TIP perpetrators and victims. “We have this year started the establishment of a corps of wardens and these wardens would be going into mining and logging settlements and along border areas where trafficking has been prevalent,” he said.

Granger vowed that his administration would ensure that victims are protected and their lives improved while traffickers are brought to justice. “The Government of Guyana today is committed to reversing this indifference towards the crime of trafficking in persons. We will do so by enhancing education and strengthening enforcement in order to eliminate the scourge entirely,”he said.

United States Ambassador to Guyana, Perry  Holloway announced that the US would be bringing to Guyana a team of experts from the International Organisation of Migration (IOM) to train front-line government officials and others who are engaged in the daily fight against TIP.

Williams-Corbin added that 50 civil society representatives would be trained in identifying and reporting TIP, and five manufacturing companies would be asked to include educational messages and contact information for the TIP hotline on their product labels.

Latest available figures show there were 40 TIP cases in 2014; a 47 percent increase in 2015 and a 145 percent increase in 2016 from the base year of 2014. Of the 197 persons during the 2014 -2016 period, 89 percent were females and 89 percent were 32 years and younger. The majority of the victims of modern day slavery were Guyanese, with non-nationals accounting for 41 percent. Williams-Corbin said 44.2 percent of TIP occurred during the period under review in Region Four (Demerara- Mahaica) and 22.3 percent in Region 7 (Mazaruni-Cuyuni).

“The analytical data is clear. There is an increase in the number of reported cases reaching authorities. It reflects that the number of identified victims is on the increase,” the Coordinator the Counter TIP Unit said.

Holloway concurred that the increased figures were due to more reports. “We do share the assessment of the analytic team that the increase you see there, while it looks very high, is likely due to increased awareness and reporting,” he said.

Operationally, the Counter-TIP official said surveillance and surprise visits would be conducted on businesses and individuals across Guyana. “From the intelligence gathered, we will execute surprise inspections or raids on suspicious locations,” she said.

Corbin-Williams said a Victim Rights Handbook would be published by the end of March, 2017 to be used by all stakeholders.

The American Ambassador said the United States (US) government is very proud of Guyana’s ranking in its 2016 Report that saw Guyana moved from the Watch List to Tier Two. “This improvement recognises the effort of the government, TIP Task Force, the TIP Unit, prosecutors and the judiciary in combating modern-day slow.”

Holloway also praised government’s 2017-2018 National Plan of Action for the Prevention and Response to Trafficking In Persons. “We are very impressed by the government’s action plan, the implementation of which will serve as a guide to even further improvements in the anti-trafficking in persons effort,” he said.

President Granger recalled that TIP had become a serious problem over the years during which the past People’s Progressive Party Civic (PPPC) government had been dodging and denying that the problem had existed. “The previous administration’s efforts to combat Trafficking In Persons were often rejected with notorious indifference or indecisiveness to the crime. The seriousness of the crime was de-emphasised. Few efforts were made to combat trafficking in a systematic way,” he said.

The Guyanese leader remarked that the then government had, like delinquent student carrying his own report home, crafted its own report when an adverse one had been presented.