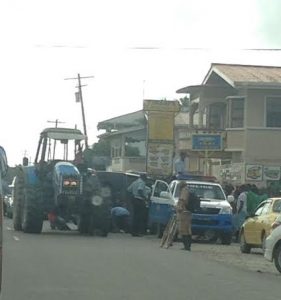 Several members of the Guyana Police Force and prisoners were Friday morning injured in an accident at Uitvlugt, West Coast Demerara, police said.

Divisional Commander for West Demerara, Assistant Commissioner Leslie James  said a 15-seater bus that was transporting the police and prisoners from the Essequibo Coast slammed into a building.

He said the police bus took evasive action to avoid hitting a vehicle coming from the opposite direction and slammed into the building. The building houses a dwelling and Tiwari Pharmacy.

James said the occupants sustained broken bones, but none of the injuries  was life threatening.

The three prisoners, who included one female, were accounted for, sources said.