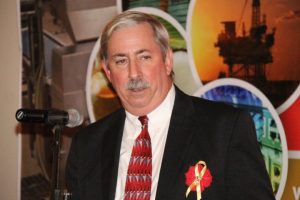 ExxonMobil is likely to drill a second well at its latest reservoir –Payara- by mid-year to determine the volume and quality of that company’s latest oil-find offshore Guyana.

ExxonMobil’s Country Manager, Jeff Simon said “we found something and we need to find out a bit more about the deposit itself and we most likely would drill another well.”

Minister of Natural Resources, Raphael Trotman said appraisal wells would be drilled during the first half of 2017 to “tell you exactly the quality of oil and off course the quantity and how much gas there is.”

With world oil prices increasing to more than US$55 per barrel, he expects some anxiety to conduct more drilling to minimize the impact of rising operational costs. “As you would notice the price of oil is starting to trend upwards which would mean the  cost of exploration and production is also going to trend up as the industry starts to come out of its slumber,” Trotman said.

Activity in the Guyana-Suriname basin is expected to heat up with even more oil being found by ExxonMobil in less than one year. Already, the company has found more than one billion barrels of oil at the Liza well.

The Payara field discovery is about 10 miles (16 km) northwest of the 2015 Liza discovery.

Payara is ExxonMobil’s second oil discovery on the Stabroek Block and was drilled in a new reservoir.

The Payara-1 well targeted similar aged reservoirs that were proven successful at the company’s Liza discovery.

Exxon said The well was drilled by ExxonMobil affiliate Esso Exploration and Production Guyana Limited, and encountered more than 95 feet (29 meters) of high-quality, oil-bearing sandstone reservoirs. It was safely drilled to 18,080 feet (5,512 meters) in 6,660 feet (2,030 meters) of water.

In addition to the Payara discovery, appraisal drilling at Liza-3 has identified an additional high quality, deeper reservoir directly below the Liza field, which is estimated to contain between 100-150 million oil equivalent barrels. This additional resource is currently being evaluated for development in conjunction with the world-class Liza discovery.

Drilling on Payara began on Nov. 12 with initial total depth reached on Dec. 2. Two sidetracks have been drilled to rapidly evaluate the discovery, and a well test is underway to further evaluate the successful well results. The well data will be analyzed in the coming months to better determine the full resource potential.