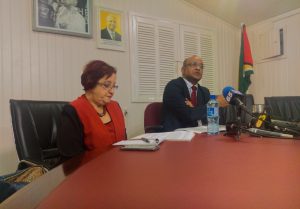 Opposition Leader Bharrat Jagdeo is still awaiting word from the Presidency Ministry on a suggested meeting with President David Granger on the appointment of a GECOM chairperson, but Jagdeo said, should the meeting happen, he would put forward the Caribbean Court of Justice, headquartered in Trinidad and Tobago, interpret the legislation.

Jagdeo said he is open to meeting with the President as soon as practicable, even Thursday evening.

“If after pointing these arguments out to him he still held on to his original view I would have proposed to him that we jointly approach the Caribbean Court of Justice to get an interpretation of Article 162 of the Constitution,” he told a news conference.

Jagdeo, however, said if the President goes ahead and appoints someone else other than the six names that have been already submitted, his party would challenge it in court. “It may very well be that we may have to go to the court to seek an interpretation of this Article (of Guyana’s Constitution),” said Jagdeo who is also the PPP’s General Secretary.

The Opposition Leader said he was still eager to meet with the President to discuss the controversy surrounding the eligibility criteria for nominees for the post of GECOM.

The President has said the Constitution provides for a current or retired judge or someone eligible to be a judge is the preferred person to be appointed a GECOM Chairman although there is provision for a “fit and proper person” to fill that post.

Asked about the inclusion of East Indian rights activist, Rhyaan Shah and pro-PPP History Professor James Rose, Jagdeo said they are not members of his party and Shah has also been critical of the PPP.

Shah is a former Chief Executive Officer of the now defunct Guyana Television Broadcasting Company (GTV) and an Indian rights activist with strong association to the dormant Rise Organise and Rebuild (ROAR) party led by Ravi Dev.  Rose has for several decades been closely associated with the PPP.

Jagdeo added that all six nominees are impartial. “We need someone who is impartial, can withstand pressure from one side or the other to act in an unprofessional manner.  I think that the current names that I have submitted all bear that hallmark,” he said.

President Granger–a one-time nominee for GECOM’s Chairmanship by then Opposition and People’s National Congress Reform leader Senior Counsel Desmond Hoyte- has said he wants to break with more than 20 years of unconstitutionality and appoint a judge.

Dating back to 1992, late Senior Counsel Doodnauth Singh was the only person with a legal background who was appointed GECOM Chairman. The others are Edward Hopkinson, Retired Major General Joseph Singh and Veterinary Doctor, Steve Surujbally.

Jagdeo said he has been cautious about joining the public debate around the issue. “I thought some of the confusion and the noise surrounding this matter could have been avoided had we dealt with each other in a more professional manner,” Jagdeo told the press corps during the Opposition Leader’s first press conference.

Jagdeo said he learned of the President’s view via a recent media brunch without informing him about the list. “I thought that that was a political act,” Jagdeo said adding he could not address the issue until he received formal notification.

Jagdeo said upon examination of media stories and online comments, many people had created impressions in their mind about the issue.

He cited Article 161 (2) of the 1980 Constitution which he read that the elections commission chair shall be appointed by the President at his discretion, adding that the provision provides for judges as well as people who could be appointed as such.

He cited what he called a more updated version of the constitution which indicated the elections commission chair could be appointed from a list containing “any other fit and proper person.”

Jagdeo said the new constitution broadens the categories for appointment. “This is clear to me… so we have a different view that outside of people qualified to be appointed judges, others can be appointed to the post,” he added.

Jagdeo said practice would show that the President’s interpretation is correct. He cited former Opposition Leader Desmond Hoyte who submitted lists for GECOM chairs in 1994, 1997, and 2001, but these persons were not always judges or capable of being judges.

He noted if President Granger is correct then that would show the late Mr Hoyte, a Senior Counsel, did not understand the constitution. Jagdeo maintains his list, already submitted to the President, meets the necessary qualifications required for the position.

Jagdeo said he still needs clarity from the President on whether he is citing Guyana’s old constitution, or if there is some other reason for the rejection of his list of six nominees.

He said he sought a meeting from the President who could benefit from another legal view other than Attorney General, Basil Williams SC, whom he claimed has given wrong advice in the past.

The Opposition Leader said GECOM, an integral body in Guyana’s electoral system, cannot be left without a chairperson. He maintains he is still open to meeting with the President even though there is no indication this will happen.