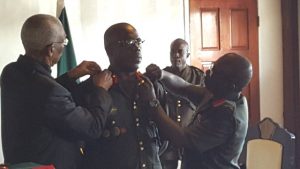 Patrick Lewis was promoted from Colonel to Brigadier. In picture, Commander in Chief and President, David Granger and then Chief of Staff, Brigadier George Lewis changed his Mr. West’s badge of rank. Brigadier Lewis was then promoted to be the new Chief of Staff.

President David Granger on Tuesday explained that the short tenure- three months- of former Chief of Staff of the Guyana Defence Force (GDF), Brigadier George Lewis was aimed at ensuring there is a smooth and predictable succession plan.

“It is symbolic because it represents due process. It represents the decision of the Guyana Defence Board to ensure that officers retire when they are due to retire fully and officers are advanced to higher posts on the basis of seniority and their performance,” he said at the promotion of  Patrick West from Colonel to Brigadier and his appointment as the 10th Chief of Staff of the army.

He was also awarded the Military Service Star (MSS).

Lewis was appointed Chief of Staff in October, 2016 and his military career has ended on his retirement, paving the way for Brigadier West. The the new Chief of Staff, who has 33 years service, retires in another four years.

The Commander-in-Chief and President remarked that “despite the brevity of his (Lewis) tenure  we were pleased to follow the correct procedure” and that Brigadier West is qualified, having completed his military education locally and overseas. “There is no way anybody can criticise the professional education of Brigadier West.”

The new Chief of Staff received his military training in Guyana, Brazil, China and the United States. He is the holder of an Msc Degree in Administration; Master of Military Arts and Science from the Command and General Staff College in the United States, a Bsc Degree in Public Administration from the University of Guyana and a Certificate in Human Health and Global Environmental Change from the University of Guyana. 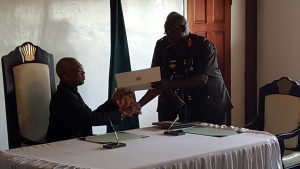 Brigadier Patrick West receiving his instrument of appointment as the new Chief of Staff of the Guyana Defece Force from Commander-in-Chief =, President David Granger.

Granger assured that the promotion and appointment of West sends a strong signal that no one would be bypassed because of accusations or vengeance.  “This is in keeping with the Defence Board to ensure that there is no future disruption to the professional development of members of the Guyana Defence Force so they could look forward to a comfortable and safe tenure of office without fear of recrimination or retribution and this is how we expect the force to function,” the President said.

Brigadier West is the Senior Pastor of the Streams of Power Ministries. He is married to Margaret West for 23 years and they have five children.