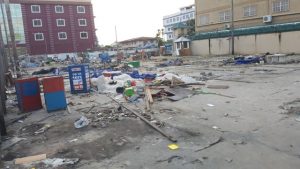 The now vacant ‘Parliament View’ land at the corner of Hadfield and Lombard Streets.

Vendors, who once occupied the plot of land at the corner of Hadfield and Lombard Streets- Parliament View- were early Sunday morning removed from there.

Several stalls were demolished, while most of the vendors were  present to relocate their goods to a small plot of land south east of the Stabroek Market near the K&VC restaurant. Others had no choice but to take their properties home.

The owner of the land, Hareshnarine ‘Chiney’ Sugrim, has said that he needs the land to build a high-rise parking lot and restaurant.

The fruit vendors, according to sources, would most likely be allowed to vend outside the old Guyana National Cooperative Bank (GNCB) building. 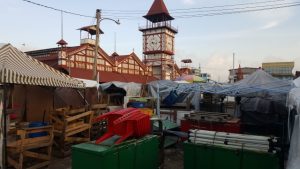 The congested area where several of the vendors stored their stocks and other properties overnight following the demolition and removal exercise at ‘Parliament View’ at the corner of Hadfield and Lombard Streets. Owner of the land, Hareshnarine ‘Chiney’ Sugrim wants to construct a parking lot and restaurant there.

One vendor, who spoke with Demerara Waves Online News Sunday morning, said she would be unable to get adequate sales from inside the small congested area because already several vendors have occupied the front.

Ahead of Guyana’s 50th Independence Anniversary, the vendors were removed from the car park on the southern side of Demico House and other areas close to Stabroek Market.

Sugrim had come to the rescue of the Georgetown City Council by allowing the vendors to ply their trade on the land free of cost.

More than 100 vendors had occupied the land since May, 2015  after the Municipal Government ordered them to relocate from areas that had been poorly kept. Authorities then had said that the congestion around Stabroek Market had been a haven for thieves and drug users.