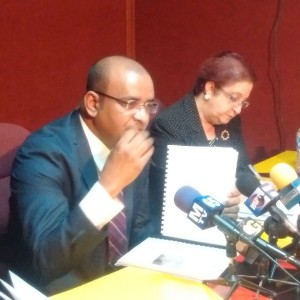 Opposition Leader, Bharrat Jagdeo on Sunday declined to immediately react to President David Granger deeming the list of nominees for post of Chairman of the Guyana Elections Commission (GECOM) “unacceptable”, but his People’s Progressive Party (PPP) believed the Guyanese leader appeared set to unilaterally name someone.

Jagdeo said he prefers to await Granger’s formal letter, stating his position on the six names that were submitted to assist the President in finding a replacement for Dr. Steve Surujbally who resigned with effect from November 31, 2016.

“When I receive a letter from him then I will respond formally. I have not received any letter from the President rejecting the list so far,” he told Demerara Waves Online News.

Teixeira, however, said President Granger seemingly signaled that he would be naming a GECOM Chairman unilaterally. “It would be interesting if they didn’t but predictably, I think that’s what they are going to do,” she told Demerara Waves Online News. She said the President has no discretion and would have to unilaterally appoint a judge or  retired judge from Guyana or any other Commonwealth jurisdiction. “He has no discretion to move outside of that to find a fit and proper person,” she added.

Teixeira said the governing APNU+AFC coalition appeared set to inflict “another hit at democracy” in which Jagdeo’s list has emerged out of consultation with religious, civil society and non-governmental organisations.

However President Granger Sunday morning told a media brunch on the lawns of State House that he has rubbished Jagdeo’s list of nominees. “The list that was sent to me was unacceptable,” he said. He stressed that Guyana’s constitution appeared to place greater preference for the GECOM’s Chairman to be current or former judge in Guyana or the the Commonwealth or qualified to be appointed such a judge or any other fit and proper person. The President noted that the Constitution provides for the appointment of a person with such a legal background if the Opposition Leader submits a list that is unacceptable to him (the President).

“Four times in one article it mentions that word- “judge”- so the only thing about the list is that it comprises six names,” Granger added.

The non-governmental African Cultural and Development Association (ACDA) has already criticised Jagdeo for failing to consult with Afro-Guyanese organisations and has called on the President to reject the list.

Describing then President Desmond Hoyte as a “brilliant lawyer,” Teixeira said it was he who had selected Ambassador Rudy Collins from a list of six nominees who had been presented by then Opposition Leader, Cheddi Jagan.

When Jagan and Jagdeo became Presidents, the PPP official said it was the Opposition Leaders from the People’s National Congress Reform (PNCR) that had submitted lists with the names of  gold miner Edward Hopkinson (1994);  Attorney-at-Law, Doodnauth Singh (1995); Retired  Major General, Joseph Singh (1998) and Dr. Surujbally (2002) as GECOM Chairman. “None of those were judges and I didn’t hear the PNC object because it was from a list they had submitted so it is highly contradictory what he (Granger) is saying base on the precedent of his own party which he heads,” she said.

2017-01-08
Denis Chabrol
Previous: BREAKING: Jagdeo’s nominees for GECOM Chairmanship “unacceptable”
Next: Eye On The Issues: It was as if that list was submitted to be found unacceptable by GHK Lall