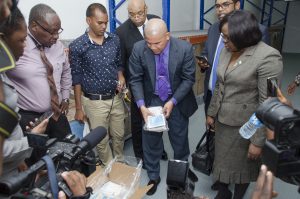 Public Health Ministers Dr George Norton, and Dr Karen Cummings open boxes with umbilical cords at the Sussex Street drug bond after the PPP last month factually stated that there were no medications stored there.

In what appears to be a demotion, Minister George Norton has been sent packing to the Ministry of Social Cohesion after several controversies over drug procurement under his watch at the Ministry of Public Health.

A Ministry of the Presidency official confirmed that Volda Lawrence has been shifted from Ministry of Social Protection to the Ministry of Public Health.

In reality this means that Ally, already a trusted political decision-maker in her People’s National Congress Reform (PNCR) political party,  has been elevated to a senior minister while Norton is now merely a minister in the ministry of the presidency and answerable to Minister of State, Joseph Harmon.

Political Scientist, Freddie Kissoon believed that Norton has been stripped of the Health Ministry because of the recent controversy over the exorbitant rental and under-utilization of the pharmaceutical bond from a party member. Concerns, Kissoon noted, have been repeatedly raised about the shortage of drugs across the country.

Norton last year was forced to apologise to the nation and the National Assembly for providing inaccurate information the House about the rental of the drug bond.

The removal of Norton, a Vice Chairman of the People’s National Congress Reform (PNCR), comes at the end of a Commission of Inquiry into the drug procurement at the Ministry of Public Health by former  Assistant Police Commissioner, Cosbert.

“It is quote obvious that it might have to do with the bond issue and the shortage of drugs,”  Kissoon, a former University of Guyana Political Science lecturer, told Demerara Waves Online News.

Norton has been also embroiled in controversy over the release of large consignments of imported foods that the Food and Drug Administration has deemed unfit for human consumption.

With Norton having more than 30 years of experience at the Georgetown Public Hospital Corporation, Kissoon said it would have been better to have a specialist minister in health.

The Political Scientist could find no reason for removing Lawrence, but pointed to her recent presence outside Red House in a counter-protest against the opposition People’s Progressive Party in relation to the eviction of the Cheddi Jagan Research Centre from that government property.

“I don’t feel that she misbehaved. she carried a counter picket.,” he said.

Kissoon, meanwhile, gave the Ministry of Social Cohesion very low marks for lessening ethnic suspension and promoting cultural integration over the last 19 months of the APNU+AFC government. “I don’t think that ministry has had a healthy balance sheet,” he said.