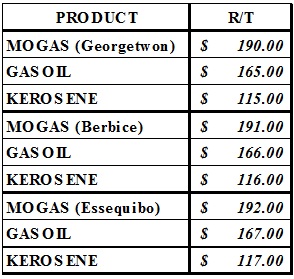 Guyanese will from Monday, January 2 have to pay more for gasoline, kerosene and other products being sold by the Guyana Oil Company (GuyOil) due to a rise in world oil prices.

“These increases are directly related to increase in acquisition cost from source and are consistent with trends in the upward movement of world market price for petroleum products,” the company said in a statement.
The state-owned oil company largely sets the retail price for fuel products being sold at filling stations that are associated with private fuel importing companies.

“It is instructive to note that Guyoil had reduced the price for gasoline in October 2016, which was consistent with our policy of passing on favourable prices to the Guyanese populace whenever possible,” GuyOil said.