Vigil and counter-vigil outside Red House 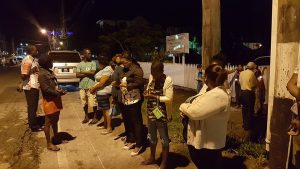 While top members of the PPP leadership sang and held lit candles outside Red House, a group of mainly women stood on the roadway in what appeared to be a counter vigil by the governing coalition.

Among them were Minister of Social Protection, Volda Lawrence and known supporters of the People’s National Congress Reform / A Partnership for National Unity (APNU). Lawrence defended their right to be outside Red House also. “Actually, I have a vigil too. As a Guyanese citizen, this is State property and any person or persons who take State property without being given the authority to do so, the State has a right to ensure that it is returned to State hands,” she told Demerara Waves Online News. “As a Guyanese, I am here on a vigil too to ensure that this building here behind us, which is State property, is used in the best interest of all Guyanese.”

Lawrence, a PNCR executive member, preferred that the building is used top reflect the life and work of all of Guyana’s presidents, not just one President. “I have had several Presidents as a Guyanese.”

She could not, however, say whether the National Trust which would soon occupy Red House would include provisions to have the works of all of Guyana’s presidents housed there. President David Granger has already said there should be such a facility. 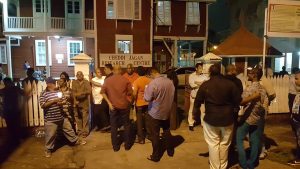 PPP supporters at a candle light vigil outside Red House.

When a heavy downpour came, the PPP supporters went inside the compound and sheltered at Red House while the pro-government braved the rain for a few minutes before scampering off to vehicles that were parked nearby.

Earlier Friday, the High Court ordered that neither the Attorney General, Basil Williams nor any other agent of the State should remove any item from the building after the Cheddi Jagan Research Centre took legal action.

Late Friday, workers from the Ministry of the Presidency descended on Red House and removed the Cheddi Jagan Research Centre’s sign and placed it on the ground on the southern side of the building.

After a report was made to police, several investigators arrived and spoke with the Ministry of the Presidency workers.

Government maintains that the leasing of Red House to the Cheddi Jagan Research Centre for GYD$1,000 per year was illegal and Granger revoked it.

The Ministry of the Presidency said the Cheddi Jagan Research Centre has until December 31, 2016 to vacate the building.

Earlier Friday, Centre workers were busy packing up to possibly leave the building, but for the time being seemed set to exhaust legal options. The case comes up in February 2017 after former Attorney General, Anil Nandlall and his successor file responses top each other.