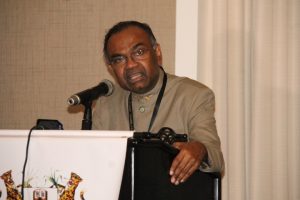 A think-tank, set up to mobilize and involve ordinary Guyanese and organised civil society in crafting policies, has so far found mixed reactions to performance of government.

“We believe there is wisdom in the grassroots on how to solve many of the problems and we believe  a lot of the bottlenecks and a lot of the real issues  that affect our peoples is within the communities that they live and unless they could be educated, reoriented, empowered and be facilitated to act to resolve these issues, we cannot do it,” said Tennassee, a former leader of the now defunct Democratic Labour Movement (DLM) political party which had been part  of the Patriotic Coalition of Democracy (PCD) in Guyana’s struggle for free and fair elections.

TRI plans to conduct informal informational interviews and polls to determine trends on major issues such as the economy, crime, utility services , cultural and social issues to develop policy briefs and hold annual conferences on The State of Guyana in the Grassroots. TRI hopes to involve and hire Guyanese at home and in the Diaspora to help execute its mandate

TRI, with funding from overseas-based Guyanese Floyd Haynes, intends to adapt existing solutions from other countries and produce original findings to influence policy makers. “If Guyana develops a best practice that can be exported globally,” he said of a plan to share and transfer knowledge and expertise. Tennassee said International Financial Institutions merely rely on research from Developed Countries to apply to Guyana, resulting in a gap.

The think-tank  plans to involve associates from across the political divide in brainstorming issues facing Guyanese and developing policy analyses and policy briefs that will be used to lobby policymakers.

In a recent informal capture of the views of Guyanese in mainly Afro and Indo-Guyanese communities in Berbice and West Demerara, Tennassee said several persons appeared disappointed in the  David Granger-led coalition while others, though dissatisfied, were still willing to give the APNU+AFC coalition another chance whenever general and regional elections are called.

Tennassee said the informational interviews, which were conducted in November, also revealed that  people were concerned about the crime situation, potential increase in water and electricity bills, perceived corruption, incompetence and bad governance.  Those informal talks with ordinary Guyanese, he said, have revealed that much had been expected from President David Granger to tackle crime because of his military background. “These things take time but they are impatient about that (crime),” he said.

TRI officials- Tennassee and Melanie Smith- found  “there is a great cry” across the coast to address the huge gap between incomes and expenditures, resulting in many persons “hustling” several jobs to earn sufficient money. “Guyanese in the grassroots are alive and kicking, they are hustling. They are trying to best.  They want to make it but somehow those who govern have to be reach out to them and be in constant communication with them,” said Tennassee.

Despite calls for farmers to diversify and produce more, the TRI official said farmers were crying out for government to find markets in the Caribbean.  The markets of Guyana cannot provide a living for the farmers of Guyana. It should be declared a State of Emergency to find markets for these products

Politically, he said the tone was that the PPP appeared vibrant after its defeat at the May, 2015 general elections and appeared poised to become the next government in the future under Opposition Leader, Bharrat Jagdeo.

The idea to establish the TRI think-tank was born at a conference held at the University of District Columbia on “Aspirations for Real Change: 2016 and Beyond”. There, 70 academic and professional representatives discussed governance, accountability and transparency; national identity; moving  beyond race, and the role of the Diaspora.

Tennassee said the time has come for the grassroots and civil society to shift from race-based political discourse and instead apply, adapt and reorient ideas to the Guyanese society. “We want to continue the dialogue that we had into Guyana and find out whether the issues that we were dealing with were issues on the minds of Guyanese at home to see how we could be a bridge in the conversation, in the aspiration for real change in Guyana between the Diaspora and here,” he said.