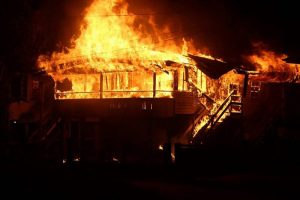 Sources said the house had no electricity.

The house was occupied by Troy Williams, a fireman. Police said the occupant told them “he was awakened by a loud explosion and discovered part of the house in flames, causing him to break a window and jump to safety.”

Gentle said fire fighters confined the blaze to one house located at the back a few houses away from the ball field.