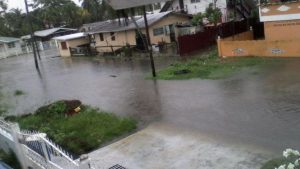 The National Drainage and Irrigation Authority (NDIA) says it is fully prepared to respond to any eventuality which may arise as a result of the rainy season, as pumps and excavators have been deployed countrywide.

Chief Executive Officer, National Drainage and Irrigation Authority (NDIA), Mr. Fredrick Flatts underscoring the importance of being prepared pointed out that 93 and 94 percent of pumps and excavators respectively are operable and have been deployed at critical locations in all coastal regions,  to assist in drainage needs.

“Of the 58 pumps, 54 are working and have been deployed at critical locations to ensure water which have been accumulated recedes off land within 24hrs,” Mr. Flatts was quoted as saying in a statement issued by the Ministry of Agriculture.

The NDIA currently has a fleet of 99 excavators which are deployed at critical location  to clear drainage   and de-silt canals. Of the 88 sluice owned and operated by the NDIA, 83 are fully working and contracts have been tendered for bids to have the remaining 5 operable.

“We are in a good place at the moment but we are taking all the necessary steps to ensure that we have the additional sluice working to further complement our fleet,” the CEO said.

At Region Two, there is currently a problem with flooding due to siltation. The Ministry of Agriculture has since deployed two excavators and a pontoon, which commenced de-silting the outfall channels, to bring relief to those affected as a result.

With respect to flooding in the city, the Chief Executive Officer of the NDIA will be having talks with the City Engineer, Mayor and City Council (M&CC) to see where assistance can be given where necessary, since the drainage of Georgetown falls within the remit of the Mayor and City Council.

The Hydromet department has since advised that rainfall is expected to continue for the remainder of Friday and Saturday and as much as 45mm is expected which is above the established drainage capacity within the city.

According to Chief Hydromet Officer, Dr. Garvin Cummings, accumulation of water can be expected in some areas between tides.

“We recorded 73.2 mm of water between 8 and 11 this morning alone, so you can see the variations. Although this is expected to decrease in magnitude, rainfall is expected to continue over the next 3-5 days in regions 4 and 5,” Dr. Cummings said.

Over the last year, the Government has prudently managed the drainage sector thus making it efficient in addressing drainage and irrigation needs.