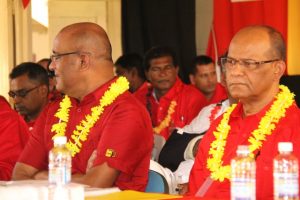 Opposition Leader, Bharrat Jagdeo opted to remain mum on whether he wants to take away the General Secretary post of his People’s Progressive Party (PPP) from incumbent, Clement Rohee.

However, key figures in the PPP have confirmed separately to Demerara Waves Online News that Jagdeo wants to become the next General Secretary which will make him the de facto leader.

Rohee has slipped moved from number 10 in the 2013 Congress to number 6 at the latest Congress held last weekend.

The usually frank Jagdeo declined to say definitively whether he is interested in assuming that post, once held for decades by late founder-leader, Dr. Cheddi Jagan. “Those are issues that we will discuss at the party level and whenever the time comes  you’ll know about this,” he said.

Sources told Demerara Waves Online News that the post of General Secretary would be dealt with when the 35-member Central Committee holds its first meeting possibly in January, 2017.

Word of Jagdeo’s apparent interest in becoming the next General Secretary surfaced  less than one week after he called on party members at the opening of the 31st Congress  that it was time that the PPP focuses on what is good for Guyana rather than ideologies such as capitalism and socialism.

Rohee is considered one of the few remaining ‘old-guard’ ideologues in the Central Committee of the historically Marist-Leninist PPP, many others having died or opted out of the political arena.

Jagdeo’s detractors, however, oppose Jagdeo becoming the next General Secretary because he is already the Opposition Leader.

After the 2013 Congress, then President Donald Ramotar had decided to step down from the post of PPP General Secretary and hand it over to Rohee, then Home Affairs Minister.

As is customary, the President or Opposition Leader emerges from a congress with the highest number of votes.

2016-12-22
Denis Chabrol
Previous: 11 laws to be changed before tax measures in Budget 2017 take effect
Next: ‘Guyana is prepared to prove its case in Court’ -President Granger on decision by Secretary-General Ban Ki-moon on border controversy