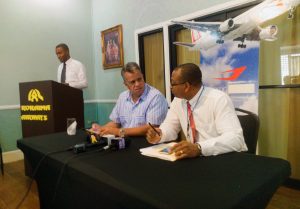 Guyana’s Civil Aviation Authority will be reviewing the operations of Dynamic Airways in Guyana in order to find an effective way forward, according to CAA’s  Director- General, Egbert Field.

He said the aviation body is awaiting a report from Dynamic Airways on the Georgetown and New York weekend delays affecting some 400 passengers.

“To give definitive answer as to what will take place,” Field told Demerara Waves Online, “we will really have to look at their report.”

Field said what is known is already in the public, which is that one of Dynamic Airways’ aircraft had been damaged at the John F Kennedy International Airport in New York, US, while the other aircraft had incurred mechanical difficulties.

“We are going to look and review and ensure this does not happen again especially during the holiday season when Guyanese travel to New York, and those over there hustle to get home. So it can be very stressful on the passengers,” the Civil Aviation head continued.

Only on Monday, some 280 Dynamic Airways passengers stranded at JFK International Airport in New York over the weekend boarded a flight to Guyana.

Another 177 passengers awaiting departure from Georgetown to New York were expected to have been moved out yesterday causing some dissatisfaction from customers, and a drawback in the airline’s schedule, which has reportedly been brought to normalisation.

As it relates to compensation for the aggrieved passengers, Captain Gerry Gouveia, Dynamic Airways’ local representative, said the company will observe its legal obligations within air transport laws.