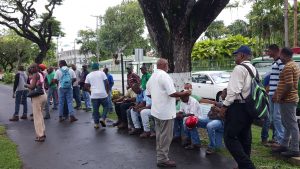 Contracted workers and managers are on standby to man the Guyana Power and Light’s (GPL) transmission and distribution system should strike action continue, even as the management has decided to hold another round of salary negotiations on Tuesday.

Chief Executive Officer of GPL, Wrenford Homer hoped that representatives of the power company and the National Association of Agricultural, Commercial and Industrial Employees (NAACIE) would be able to resolve the pay dispute before year-end and that the workers would be paid retroactively.

“Once we have this engagement tomorrow (Tuesday) with the union, our expectation is to see an amicable conclusion to the wage and salary negotiations with NAACIE and that we could before the end of the year we can basically close off 2016 to those members by way of paying them whatever those approved rates are retroactive to January of this year,” he told a news conference.

GPL’s Deputy CEO, Elwyn Marshall assured that the utility company has put in place a contingency plan comprising of contracted workers and management to man the transmission and distribution network if the workers continue to stay away from work. 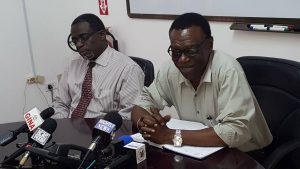 “What we did earlier today is that we contracted these contractors and we have them on standby. In even there is an emergency they will work along with some of our…contractors internal and external as well as the managers to address any problems that arise between now and tomorrow (Tuesday) when the regular workforce come back,”  he said.

The transmission and distribution workers downed tools early Monday morning to protest the failure of GPL to pay the latest demand of eight percent across-the-board increase in salaries, down from the original demand of 15 percent.

Following meetings by the power company’s board and management, Homer hinted that GPL negotiators would be increasing its current offer of two percent.

Homer said the workers dispersed from the various locations after he held discussions with NAACIE President, Joseph and the shop stewards that another round of negotiations would be held on Tuesday.