Million$$$ spent on fully-funded scholarships for Gov’t Ministers, others close to APNU+AFC 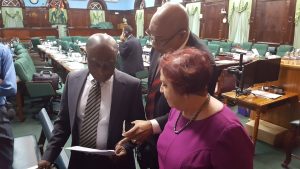 A question raised in the Supply Committee of the National Assembly by the political opposition for Minister of State Joseph Harmon to provide a list of all current government scholarship awardees has revealed a padded list of persons close to the David Granger administration granted scholarships to the tune of millions of dollars.

Minister Henry’s scholarship for a doctorate in public health has so far racked up a sum of $3.3M, while Minister Ferguson’s scholarship has come in at the value of $3.3M.

The daughter of the Minister of Education, Alicia Roopnaraine was listed as a first year Psychology student in the UK, with a Guyana government scholarship valued at $2.5M.

A Guyana Chronicle Board Director and close affiliate of the APNU+AFC, Tabitha Sarabo-Halley is currently pursuing Public Policy Management studies in the UK to the value of $3.4M.

There were also a number of undergraduate scholarships awarded. Those including high-achiever, Elisa Hamilton, who topped CSEC a few years ago. Hamilton’s scholarship was publicly announced owing to her stellar academic performance. Hamilton shares the space with quite a few law and medicine undergraduate students.

The list presented to the National Assembly includes a total of 38 scholarship awardees.

Junior Education Minister Nicolette does not believe her position as a government would have biased or prejudiced a the selection process. She said others should advocate for further training of political leaders.

The Minister told Demerara Waves Online that the process was advertised and the interested persons would have applied and been approved.