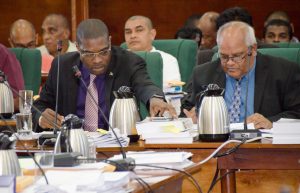 New revelations surrounding the D’Urban Park Development Project and its building-company, Homestretch Development Inc, were finally revealed in the National Assembly last evening when Public Infrastructure Minister David Patterson explained to the Supply Committee the $500M budgeted in 2017 to pay-off the company’s debts.

The debate on the D’Urban Park project has consumed the public eye since a motion brought by Opposition MP Juan Edghill some time ago sparking tense and passionate exchanges between the two sides in the National Assembly.

Minister Patterson revealed this afternoon that the company had submitted an audited report which showed that some $60M was raised in donations to commence works on the project site, which was the main site for Guyana’s 50th Independence celebration last May.

The Homestretch Development Inc (HDI) was established in January 2016, even though it began collecting donations in 2015 on behalf of the government. Education Minister Dr Rupert Roopnaraine is named as a Director on the company’s Board.

It was MP Edghill who led the charge calling for answers from Minister Patterson in the Committee of Supply today as the Minister was called to exclaim a questionable allocation of $500M to his Ministry.

It could be recalled that some $450M was already plugged into the D’Urban Park project from April 2016 when it was revealed that the private company which had started the work was running low on funds, and that the work done at the site was below an acceptable standard.

Patterson told the House that on November 22 of this year, the HDI wrote to the Finance Ministry seeking assistance with liabilities owed to persons and companies which contributed services and material to building the project under the impression that this was government-contracted work.

The Minister justified the spending saying D’Urban Park is a national product of the country, and an asset of the people. Reading out a long list of contributors to the project, Patterson mentioned, among others, Baishanlin, Courtney Benn Contracting, BK International, Palm Court, National Hardware, Buxton Gas Station, and Puran Brothers.

Edghill then interrupted the Minister calling for the names of persons owed, how much was owed, and what works were conducted. The Minister obliged reading out a long list of persons who were owed monies by the HDI.

The Opposition MP was convinced that the project could not satisfy government’s previous position that private funds were used to build D’Urban Park.

Edghill questioned whether the “project that from all estimation cost $900M of taxpayer money plus $60M in cash and kind donations can be defined as a project done by private funding.” Minister Patterson responded that he could not understand the question being asked.

Edghill further questioned what procurement process was used to engage persons, to which the Minister responded again that he could not understand the question.

Edghill questioned Minister Patterson on what process will be used to transfer money from the consolidated fund to a private company, noting that this must be a loan.

Minister Patterson responded only saying, “D’Urban Park belongs to the country [and the] transfer will be made to pay for the asset which the state does have at the moment.”

If the Finance Ministry met with HDI on November 22, MP Edghill questioned, ” are we to understand that sometime between November 22 and 28 (the date of budget presentation) this inclusion was made in the budget?”

Minister Patterson challenged the intention of such questions noting that the Ministry of Finance made the provisions within the six day period.