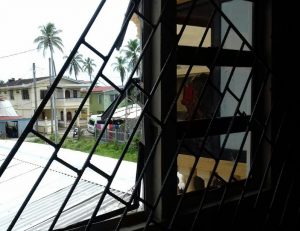 The grill that the bandits removed to allow them to gain entry through a window to the residence of Devandra Churaman. They robbed him of more than GYD$20 million in cash and jewellery.

Several bandits, armed with assault rifles and shotguns, early Monday morning invaded the home of a money changer and carted of GYD$20.5 million in Guyanese and other currencies, police said.

Dressed in American camouflage suits, five of the 15 bandits entered the house through window from a shed leading to the window at 93 Albert Street, 79 Village Corentyne at about 1:45 AM. Sources said they removed a grill before breaking the window.

Investigators were told the robbers ordered 48-year old Devendra Churaman to lie on the ground while they demanded cash and jewellery.

Watts said seven persons including a female, who is connected to one of the suspects, have been arrested. Searches of their homes, he said, have been carried out on their premises but no evidence has been found.

The Commander said the suspects from Canje, New Amsterdam and Corriverton, who range from 22 to 35 years, will be placed on identification parades and their hands and clothing would be tested for gun powder residue.

Police were told that the bandits fled the scene on foot and  might have eventually boarded a boat and motor vehicle.

During the robbery, sources said about 10 of the men took up strategic positions on the road to engage police had they responded to a report of a robbery in progress.