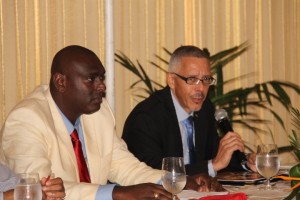 The President of the Guyana Manufacturers Association (GMSA), Eon Caesar died Friday afternoon in neighbouring Trinidad after a brief but severe illness.

Executive member of the Private Sector Commission (PSC), Ramesh Dookhoo said Caesar died in a hospital in the twin-island republic where he had been on life support.

Dookhoo praised Caesar for his contribution and leadership in the private sector and Rotary. “I think Guyana has lost a good, young son. Eon was a very patriotic person. He  attacked no one, he solved problems methodically and he was a great Rotarian and leader so it is a shock to the Rotarian community,” said the PSC official.

The GMSA President fell ill several weeks ago and was admitted to the Intensive Care Unit of  a city hospital before going overseas for medical attention.

Sources said he had initially suffered from what appeared to have been a lung infection. While in Trinidad, his kidneys failed and he succumbed.

Caesar was absent from the GMSA’s dinner held in November due to illness.