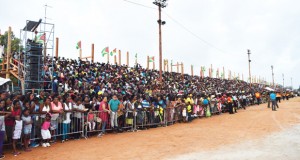 Minister of Education Dr. Rupert Roopnaraine on Thursday denied that he ever benefitted personally from cash or other donations that had passed through a company that had been established to develop D’urban Park for Guyana’s 50th Independence Anniversary.

“In over forty years of political activism, striving to achieve a better Guyana, I have never hidden behind anyone. In over forty years of political activism, I have never engaged in any acts giving off even a whiff of malfeasance and I deeply resent any whispering s or hints in the media to that effect,” he  said in a statement to the National Assembly before debate on the 2017 National Budget debate continued.

Roopnaraine also issued a thinly veiled threat that he would take legal action if the peddling of such accusations continue. “I promise this august assembly that I will not sit idly by and suffer in silence if I am now accused by anyone of such acts,” he said.

He said he has been told that none of the persons who were responsible for the project up to the point of the handover by Homestretch Development Inc to the Ministry of Public Infrastructure were paid for their services. He said when the President asked him in January 2016 to sit on the board of Homestretch Development Inc; the development team was given a task with no budget to prepare the site and so they relied on donations until April 2016 when the company’s CEO, Larry London informed government that the donations and credit arrangements had been exhausted. Cabinet then decided, he said, decided to hand over the project to the Ministry of Public Infrastructure for completion.

London and  Roopnaraine were members of the National Commemoration Commission to oversee plans for the 50th Independence Anniversary celebrations.

In apparent reference to the opposition People’s Progressive Party Civic (PPPC), he said critics of the D’urban Park project greeted  the well-intentioned patriots with accusations of “greed and malice”.

The Minister of Education had last month promised to meet with two journalists to discuss the issue prior to a meeting with President David Granger. After that meeting, his secretary subsequently called later that day and referred all enquiries to the Minister of Public Infrastructure. Hours later, President Granger sought to give an explanation on his weekly Public Interest programme.

Reflecting on the origin of the project, he said after it was realized that the National Park would have required extensive repairs and the taking in of the rugby field to accommodate the several thousand persons, a decision was taken to develop D’urban Park and works began in late 2015.

In keeping with an authorization of the  project by Cabinet, he said in January 2016 the President asked him to sit on the board of Homestretch Development Inc.