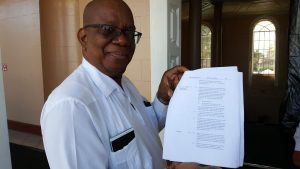 Finance Minister, Winston Jordan showing a section of the VAT Act that provides for VAT debtors to be prevented from leaving Guyana. The VAT Act was signed into law by then President, Bharrat Jagdeo.

Acknowledging that no details about the plan were provided in his budget speech, he explained that the provisions of the Value Added Tax (VAT) Act would be extended to the Income Tax Act and the Customs Act to ensure the Commissioner General of the GRA has a uniform administration of his Act. “This is to ensure that he is not hamstrung in one area even though he has the power in another area that he is administering so this is what we are doing,” he said.

In response to accusations by the opposition People’s Progressive Party Civic (PPPC) that government was about to violate Guyanese human rights by preventing them from leaving the country if they owe taxes, the Finance Minister said the law already empowers the Tax Chief to ask the Chief Immigration Officer to block persons from travelling overseas until they pay their taxes or make an agreement to do so. “The Commissioner (of GRA) already has the power to stop you from leaving the country if you owe taxes. It’s in the VAT Act; go check it,” adding that the VAT Act was signed into law by then President Bharrat Jagdeo.

Jagdeo, now Opposition Leader, has accused the APNU+AFC coalition government of attempting to violate Guyanese constitutional rights to freedom of movement and ownership of property. 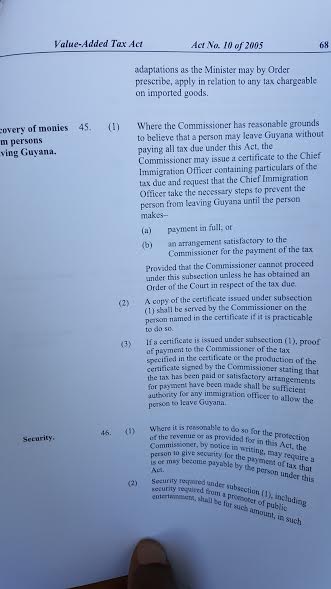 At the same time, he has said that if garnishment of persons’ monies is done through the court system he would not have a problem because the legal system would provide for a hearing rather than unilateral action by the GRA.

The Finance Minister said the GRA would be taking steps to access people’s bank accounts if they owe the GRA taxes and are putting tax and social security deductions to their own use. “There is no way that we are going to wake up and go pushing our hands in anybody’s bank account. Those are scare tactics and I think reasonable, rational people should understand it for what it is- fear-mongering and scare tactics,” he told Demerara Waves Online News.

Jordan said unless enforcement is strengthened to ensure GRA and the National Insurance Scheme get the funds that are due to them, government would be unable to pay higher salaries and improve the quality of social services. “All we are saying is that those who owe should be paying and not be using the monies for their purposes or their cash flow,” he said.

Debate on the GYD$250 billion budget concludes on Friday and from next Tuesday, the House would consider the estimates for expenditure.