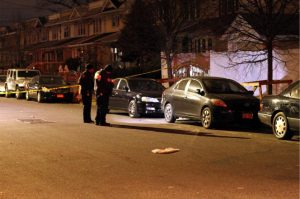 Police at the scene where a woman was found nearly decapitated at the corner of 124th Street and 103rd Avenue in Queens. New York Post Photo: Robert Stridiron

One year after a Guyanese man paid his wife US$9,000 to leave their homeland and join him in New York, he nearly decapitated her on a Queens street corner early Monday-sawing through her neck in front of a witness who mistakenly asked if he needed help before he realized the unfolding horror, the New York Post reported.

The 50-year-old man allegedly confronted the woman — identified as being in her 40s — about a man she supposedly met online at the corner of 124th Street and 103rd Avenue when they got into a fight shortly after midnight.

He then pulled out a large kitchen knife and stabbed her several times in the chest, shoulder and both hands, cops said.

Two witnesses who happened to be walking down the street at the time found Prem Rampersaud, 50, kneeling over her body making what appeared to be sawing motions with a large knife and said it sounded like he was cutting through bone, sources said.

One of the witnesses then asked Rampersaud, “Do you need help?” according to sources.

Rampersaud then turned around and looked at the pair for a moment before continuing to saw through the victim’s neck.

Police captured Rampersaud a few blocks away and took him in for questioning.

He has been charged with murder and possession of a weapon, police said.

A knife believed to be the murder weapon was recovered at the scene, officials said.

The woman was pronounced dead at Jamaica Hospital. Her identity is being withheld pending family notification.

Police said Rampersaud gave his wife approximately $9,000 to move to the US from their native Guyana about a year ago and eventually followed her to Queens where they moved in together.