Education budget reduced by $1B because of 14% VAT; cost of living will increase- MP Manickchand warns 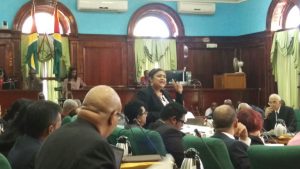 Shadow Minister of Education, Priya Manickchand contributing to the 2017 Budget Debate in the National Assembly

“Shocking”, “unconscionable”, were the words used by Opposition MP Priya Manickchand to describe Budget 2017. “Brace yourself Guyana, these are the things that are going to come,” Manickchand said in her description of the 2017 budget.

The MP Opposition told the National Assembly during her address on the budget that the budget has caused “distress and worry and fear in every single sector.
Manickchand said she cannot recall in her lifetime if there has ever been such a budget that has garnered criticism, worry, and push back from as many citizens and sectors as we have seen with the present budget.
“Reactions range from anger and rage to bemusement and outright fear from what is going to happen,” Manickchand, a former Education Minister said.
“When we say this budget is a useless in terms of our development path,” Manickchand noted, “we speak on behalf of the people.”
“This is a budget that is ill-thought out, senseless and will cause harsh living conditions that will bring down our quality of life,” the Opposition MP said, adding that complaints on the budget are wide and far.
“When coalition entered office, people were upset, people were glad, and if the government refuses to accept that people were upset then it speaks to their view of democracy,” Manickchand continued.
The former Education Minister under the PPP government went on to list a number of controversies associated with the David Granger administration including the 50% increase to ministerial salaries, and shifting positions on public servants salaries.
“All promises made by coalition government that i relied on to comfort people after they came to office became lies,” Manickchand told the House.
This budget, according to Manickchand, “promises the nation prosperity by taxation and that is a big fat lie, it is not going to work.” “This budget is a short-term spending plan. It does not say what will happen with Guyana in the next five years.”
“If you want to see growth in a country like ours,” the MP continued, “you have to tackle the constraints that hinder the private sector.”
“If the budget was serious,” Manickchand further noted, “it would have talked about investing in [the University of Guyana] UG.” “On human capital, this is a government bloated with security and still no solution on crime,” Manickchand continued.
The Opposition MP told the House there is nothing new on this budget, just to tax everything.
Manickchand cited former UK Prime Minister Winston Churchill that “a nation attempting to tax itself into prosperity is like a man standing in a bucket of water and attempting to lift himself.”
The MP then went on to challenge the proposed 14% VAT on water and electricity, and expansion of vat-exempt list. “Even the VAT-exempt list does not cater for the items that were zero-rated before,” Manickchand warned
She challenged the inclusion of VAT on medical supplies, school supplies, concrete blocks, sand, stone, lumber, which are now taken off the zero-rated list.
“Sports gear and sports equiopment qualifying for exemption under the PPP would now be taken off the zero-rated list,” Manickchand said to heckling from Government side of the House.
Manickchand challenged Minister Jordan’s position that more money will be spend on education. “This is a blatant lie,” she said sharply.
She said $11B was spent on education in 2016, while $12B was budget for education in 2017.
“But when they deduct the 14% VAT, we will actually be spending $766M less than last year under current expenditure, and $382M less under capital expenditure,” Manickchand said noting that VAT would reduce education’s budget by some $1B.
Manickchand called for the Finance Minister to listen to the people and withdraw the budget.