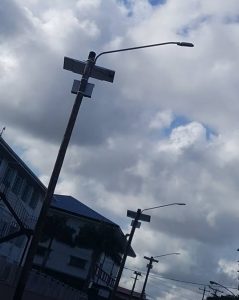 Cabinet has agreed to cancel the remaining US$1.3 million allocated to National Hardware (Guyana) Limited, under the Japanese Non-Project Grant Aid (JNPGA) of  2013 and to instead spend them on clean energy street lights.

The Ministry of the Presidency said the  procurement of renewable energy and energy efficient street lights on highways, in townships and Neighbourhood Democratic Councils (NDCs).

These efforts are in keeping with Government’s thrust to stimulate the transition to a ‘green’ state,” the Ministry of the Presidency said in a statement on Sunday.

The grant, to the sum of US $2,938, 871, was made available to National Hardware (Guyana) Limited under the JNPGA in 2013, for the procurement of goods and services to facilitate the company’s contribution to national economic and social development.

The Ministry of the Presidency said the funds were intended to be utilised for the importation of products, such as civil engineering equipment and other machinery that would aid in Government’s development efforts.

However, according to government,  after the first phase, the company informed the Ministry of Finance that it was no longer interested in participating in the Grant Aid Programme, which resulted in a residual sum of US$1,330,000.

Cabinet also agreed that the Governments of Guyana and Japan would mutually agree on a list of energy efficient and renewable energy equipment that would be procured by the Japan International Cooperation System (JICS) on behalf of the Guyana government.