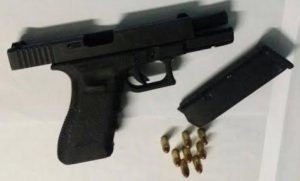 At about 12:45 AM, three males, one armed with a handgun stormed the “Wild Caught Fresh Fish Depot” at the Meadow Bank, Wharf, Ruimveldt, held the Supervisor, Shane Robin, at gun point and carted off with a camera, a DVR, a radio set and other articles. During the process, the 29 yrs. supervisor was struck on his head by the armed bandit, causing a laceration,” police said.
“During the confrontation, one of the unarmed suspects was shot to both legs and the other with the firearm ran in the said depot where they committed the robbery and concealed himself in the ceiling but was extracted shortly after with an unlicensed 9MM pistol with eight live rounds,” a police spokesman said in a statement.

The shot suspect who is 40 years. and of Bushy Park, East Bank Essequibo was rushed to the Georgetown Public Hospital Corporation. where he underwent surgery and admitted under police guard.  The suspect with the firearm is 25 years and resides at 5th Avenue Diamond East Bank Demerara.

A public spirited citizen who witnessed the robbery summoned the police who responded within minutes and confronted the men in front of the depot. One of the suspects managed to escape and stringent efforts are being made to have him apprehended, police added.

The Supervisor at the fish depot was escorted to the Georgetown Public Hospital Corporation where he was treated and sent away.