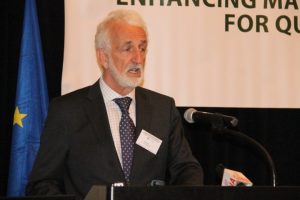 Guyana has begun taking steps to register the name, Demerara, as a Geographical Indicator (GI), even as several other countries continue to brand their sugar with that name.

The announcement was made by Lead Legal Expert, Bernard O’Connor at the opening of a two-day workshop on “Enhancing market access and promoting certification for quality origin products in Guyana.”

“Over the last week or so, three applications have been submitted to the Commercial Register for the registration of Geographical Indicators in Guyana,” he said. The products are Demerara Sugar, Demerara Molasses and Demerara Rum.

Mauritius, Fiji, United Kingdom and the United States continue to use the name “Demerara” in the packaging and sale of sugar, while Guyana over the years has maintained that the process for developing the sugar crystals is unique to this country and originally began in Demerara.

Chief Executive Officer of the Guyana Sugar Corporation (GuySuco), Errol Hanoman said he is very optimistic with the move to shift from a GI rather than a trademark while wary of likely objections. “Obviously it is going to be something that we will have to build on but obviously it will have implications for our marketing…We just doing this and becoming a GI and sitting on our laurels is not going to work. The marketing functioning has got to get out there and exploit this development,” he told Demerara Waves Online News.

O’Connor later told Demerara Waves Online News that even with the domestic registration of Demerara-branded products as GIs, “it is possible that other interested parties might come in and make  an objection.” “I don’t think they have much grounds for making such an objection but they might do so…I think that  both history and right are on the side of Guyana and I think also that there is much in the law that is on the side of Guyana so it is a process that we have to go through and going through any process the outcome is always uncertain but there are many forces and elements which Guyana has which indicates that Guyana can come through and get protection on this matter,” he said. .

O’Connor said the next step for the long-term protection of Demerara for Guyana’s benefit is the conducting of detailed administrative procedure with a lot of “checks and balances.” “We can expect that as the application goes forward, there will be ups and down and there will be hiccups but the dance has started if you like and there is a quantum difference from where we were yesterday to where we are today because now we have entered into formal procedures and formal consequences which can only in the longer term be to the benefit of Guyana,” he said.

The Legal Expert said while the GI applications for the three products are being processed, wider negotiations between the Caribbean Forum of the African Caribbean Pacific (ACP) group and the European Union are underway for the two sides to recognise each other’s GIs. “It might have, I suppose, had been better if we had finished our homework in Guyana before we started negotiations with the European Union but that’s not the way it is,” he said, adding that there would be no roadblock in handling the two sides.

O’Connor observed that Guyana’s law allows for GI protection without registration, although registration allows the Indicator to benefit from a range of advantages. The Legal Consultant said rice is the “most obvious and the biggest” product that can benefit from GI registration.

With GI protection being guaranteed in the Caribbean-Europe Economic Partnership Agreement (EPA) if they are firstly protected in individual countries, Guyana’s Foreign Affairs Minister, Carl Greenidge hopes that his country will soon register higher export earnings for products bearing the name Demerara. He cautioned against just merely registering GI, but engage in aggressive awareness and marketing. “That framework is important because the GI status alone will not automatically guarantee either increased demand or the penetration of external markets. Protection without effective marketing will not lead to increased sales at exports,” said Greenidge, a former Caribbean Community trade negotiator and ACP Deputy Secretary General.

The Foreign Minister said that with GI comes the possibility of diversifying products, improving and sustaining standards and ensuring that Commercial Registries function effectively to handle GI.

Guyana passed GI legislation in 2005 and regulations were approved in 2008. The local law is largely compliant with the World Trade Organisation’s Trade-related aspect of Intellectual Property Rights System.

In 1913, a United Kingdom High Court had ruled that the “Demerara” was generic and that a retailer who was selling Demerara from Mauritius was not deceiving the consumer but, according to O’Connor, the world is moving away from generic to specialized products.