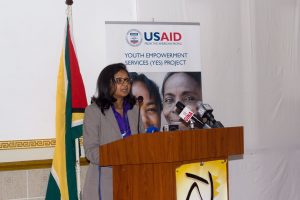 Guyana will benefit from a US$64M across-the-Caribbean project implemented by the United Nations Development Programme (UNDP) tackling crime and violence among youth. 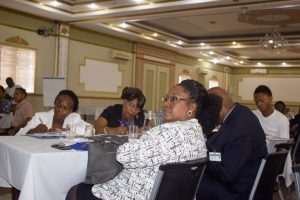 Attendees at launch of the Carisecure Project.

He said most children who were subject to physical abuse go on to live perfect adult lives, “but physical abuse doubles the risk that children, especially boys, will have convictions.”

Ramjattan said he was informed by the Director of Prisons that four out of five violent offenders never finish high school, and there is a correlation between lack of parental supervision and delinquency as well as violent delinquency.
The Public Security Minister, a lawyer by profession for some 30 years, said CARICOM states must become involved in understanding crime and violence among youth. This, he said, calls for a long-term investment in national research and intervention.
The region, according to Ramjattan, must have a coherent strategy for identifying necessary interventions to mitigating youth violence as well as programmes to evaluate suche interventions.
That, he noted, must happen within political commitments to procure resources, train the intervention brigade, and get them to implement those recommendations. “We must craft a culture that will seek and make assets out of our young people instead of seeing them as a liability,” Ramjattan noted.
The Public Security Minister plugged the need for more evidence based approaches within the region in order to make law enforcement more successful in the reduction of crime at the youth level. He said such an approach would ensure that at a policy level they “can be better at advocating what can be done on issues of gang violence, teenage pregnancy [and] suicide.”
“When we do this evidence-based decision making, we are going to be more clinical in what the programmes and policies should be,” the Public Security Minister noted
“Over the next five years, we will work in ten caribbean countries,” UNDP’s Deputy Resident Representative Shabnam Mallick said adding that UNDP’s response to crime and violence takes on a multisectoral approach.
“We know that exposure to violence at a young age is linked to long-term mental and emotional harm,” the UNDP official said, adding it “puts young people at risk of staying stable and finding jobs.
Mallick said when a young person is exposed to a justice system that is punative rather than restorative, this can cause more harm and have profound implications for community, family, and society.
The UNDP project with the Guyana Government will focus on disaggregating crime data to understand youth in crime as well as establish evidence based analysis of crime and violence data to inform policy and programming.
The programme has three levels of intervention. At the primary risk-level, after-school programmes, civic acitivites, workshops on work readiness, and community activies will be implemented with a result of reducing stigma attached to youth in leadership. The secondary level will focus on life planning and family counselling to establish postive relations and lower risk-factors.
In Guyana, the programme will be working in 15 communities with young people ages 12- 29 years old.
The project will target some 1500 to match youth with interventions based on their risk level in its secondary prevention level. At the primary level, some 6000 young people will be impacted through workforce preparation.