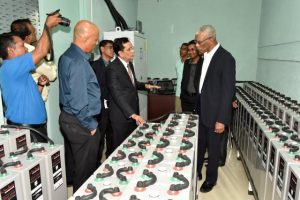 President David Granger takes a look at some of the batteries, which are a part of the solar electricity system at Demerara Bank Limited, as CEO, Mr. Pravinchandra Dave explains how the system works.

Demerara Bank Limited’s (DBL) Corporate Headquarters is now fully powered by solar energy at a cost of GYD$27.5 million, an amount the company hopes to recoup in another three years because it no longer has to pay electricity bills totalling about GYD$1.5 million monthly.

The bank says it will now offer a special eight percent interest rate for companies and businesses interested in installing similar technology. The 25,000 square foot Branch building was designed to enable the use of solar and was constructed at a cost of GYD$775 million.

Chief Executive Officer of DBL, Mr. Pravinchandra Dave, outlining a case study for other companies that are considering a shift to solar energy, said that technical feasibility and commercial viability must be determined, but added that the perception that installing solar energy is expensive is a myth.

DBL has installed 360 solar panels, with 25 years of warranty, 216 batteries and nine inverters, which can provide electricity for three days, in the absence of sunlight.  This investment means that in three years, the Branch would have already paid for the cost of the installation.  Mr. Dave believes that this places solar electricity within the reach of members of the private sector and even private citizens. He said, “One can realise how cheap the solar panel is… It is the cheapest source of energy on the earth, particularly in Guyana, where the electricity rates are comparatively high compared to other countries.” 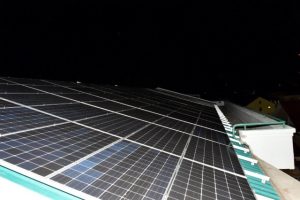 He added that the fight against climate change and the development of a ‘green’ state is not only the responsibility of the Government.  “Our Government has signed an agreement in Paris that we should try to reduce our green emissions by one or two percent. How do we achieve that? Sometimes we think that it is the role of the Government, but that is not so…and it is a misconception that solar is an expensive source of power generation. Every individual, every family can go for solar,” Mr. Dave said.

The CEO went on to describe the significant impact it would have on Guyana’s economy if more companies and individuals invested in solar electricity and other forms of renewable energy.  He said that Guyana could be transformed through the development of industry and business with the use of cheap energy.  He also added that adapting ‘green’ technologies can put Guyana in a position to capitalise on carbon credits, which can be traded on the international market as a commodity.

To support this push Chairman of the Board of Directors, Mr. Yesu Persaud announced that the Bank will support the development of ‘green’ energy in other companies or manufacturing plants in Guyana by providing a special rate of interest of eight percent.  Mr. Persaud added that because of the savings the Bank will now accrue it will begin a programme of donating light-emitting diode (LED) lights to institutions in need, such as orphanages.

Expressing his pride on what the company has accomplished, he said, “It is not only that we have given solar power to Guyana but also we have shown the world that a small third world country and an unknown company can also do it.”

The Ministry of the Presidency reported that President Granger on Saturday reiterated at the launch of the Bank’s solar powered Head Office and Corporate Banking Branch on Camp Street that his administration is committed to moving Guyana closer towards full renewable energy by 2025 and lauded Demerara Bank Limited (DBL) for leading the charge towards the development of a ‘green’ state.

The President emphasised that Guyana has significant renewable energy generation potential in solar, biogas, wind and hydro electricity and noted that the country must work to develop these resources.  He added that Guyana has advantages over many of its neighbours in the region because of the resources at its disposal and can become a renewable energy hub in the region.  “We are really sitting on our hands…  We have resources, which we have not exploited,” he said.

Adding that his administration will continue to work towards realising renewable energy use in all Government buildings, President Granger said that he expects this process to advance more quickly in 2017.

“We have the potential and I believe that in the short term lead by corporations such as DBL we will be able to move more aggressively towards clean energy use.  We have already started… in Government by asking that all of our Government buildings; police stations, our Ministries, our hospitals, our schools and university start to use clean energy sources.  It will take time but we are moving quickly.  I hope guided by the Guyana Energy Agency we will move much more quickly in 2017 than we were able to move in 2016,” the President said.

Describing his vision of a country where children are taught the value of protecting and maintaining a clean environment and where job opportunities are created for young people in the field of ‘green’ energy the President said that he is confident that while Guyana will be a petroleum producing country, it will reduce its own reliance on fossil fuels.

He said, “We are confident that our green state will be able to adopt policies, which will produce cheaper forms of energy allowing for us to save foreign exchange.  It will allow us to provide advantages to our manufacturing sector… We can save money too by phasing out the use of imported fossil fuel and even though Guyana is on the brink of becoming a petroleum producing country, I hope we adopt the status of becoming a petroleum exporting country and we can go ‘green’ and use the export funds for other purposes like building highways and bridges.”