Guyanese soldiers off to Barbados for its 50th independence anniversary celebrations 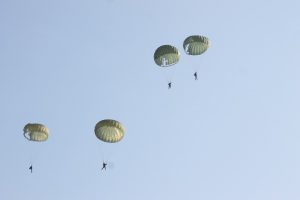 Lewis said 21 soldiers are there for paratroop and fireworks display, and five more are expected to join their colleagues.

“We were asked by Barbados to support their anniversary activities. As you know, they are celebrating fifty years this year and I think they want to make a grand occasion. They do not have the capacity but we have the capacity so they asked us,” the Chief-of-Staff told Demerara Waves Online News.

Lewis said most of the members of the Special Forces and Artillery Units of the GDF have flown by commercial aircraft while a few, along with equipment, were transported by a GDF SkyVan.

President David Granger is expected to travel to Barbados where he will join that island’s Head of Government , Prime Minister Freundel Stuart in activities on November 30, Independence Day.

Earlier this year, Granger hosted Stuart for Guyana’s 50th Independence Anniversary and used the opportunity to confer the Barbadian leader with the national award, the Order of Roraima.