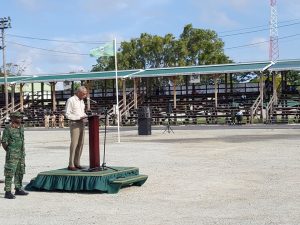 Chief-of-Staff of the Guyana Defence Force (GDF), Brigadier George Lewis and President David Granger on Sunday said further measures are being taken to crackdown on criminal activities across the country with increased aerial surveillance and ground operations.

Addressing troops at D’urban Park at the end of a rout march to mark the end of the army’s 51st anniversary celebration, Lewis said the GDF  has “increased our operational posture” to secure Guyana’s territory.

“We have seen an increase two-fold of border patrols. We have also increased our surveillance of the EEZ (Exclusive Economic Zone) with patrols every two weeks. Those patrols would have contributed significantly to reducing criminal activities both at sea and on land,” he said. Government has already noted that there has been a significant decline in the number of pirate attacks against fishermen.

The GDF, he said, has pledged to provide public safety and security to Guyana, even as its members are being trained internally, locally and overseas in life-skills and other areas.

Speaking with media representatives after addressing the soldiers who participated in the Route March, President Granger reiterated that there is perception of increased criminal activities and since then several measures have been implemented. They include more mounted police in Black Bush Polder, reduction in the number of firearms and more recently increased foot patrols. “We have been making a lot of progress in preventing other forms of violence by limiting the amount of firearms, by ensuring there are more foot patrols and in fact on the 15th of November, the police force launched a patrol so there will be more boots on the ground between the 15th of November and the 15th  of January just to keep you safe,” he said.

There are almost daily armed robberies, several of which are not disclosed to the media by the Guyana Police Force. 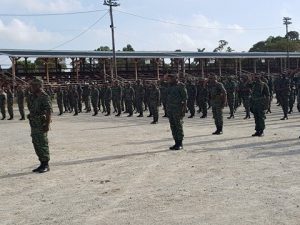 Guyana Defence Force soldiers at D’urban Park at the end of the Route March to mark the culmination of activities to mark the army’s 51st anniversary.

Granger noted that there is a lot of interpersonal violence which “we cannot always anticipate or prevent.”

In his remarks to the troops, the Commander-in-Chief praised the GDF for their role in preserving Guyana’s sovereignty and territorial integrity. “Guyana would have been a different place had it not been for the GDF. It was the GDF, which over the last five decades protected the territorial integrity and the sovereignty of our nation. The Defence Force, together with our diplomats, form the bulwark, form the shield that you will ensure that the country that we inherited is passed on to posterity,”  he said.